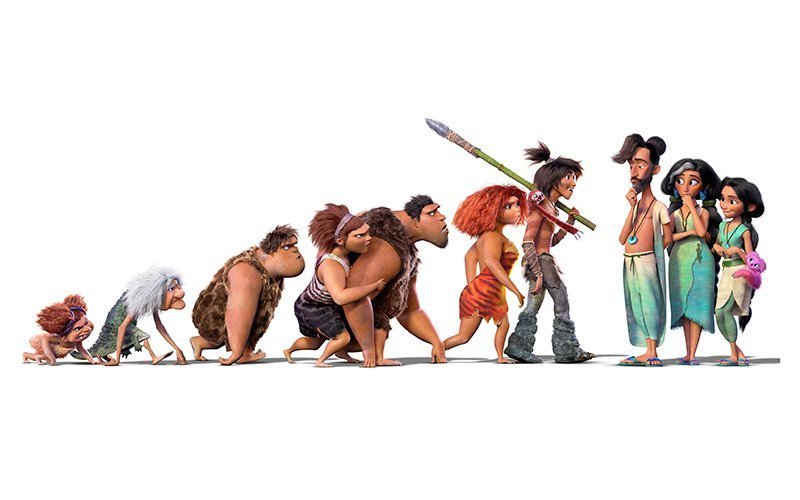 This is the poster for the movie "The Croods: A New Age." (CNS photo courtesy Universal)

NEW YORK (CNS) — The most entertaining Stone Age family since the Flintstones returns to the big screen in “The Croods: A New Age” (Universal), a delightful animated comedy suitable for almost all ages.

This follow-up to the 2013 original is based on a story by that film’s co-directors and screenwriters, Chris Sanders and Kirk DeMicco. Joel Crawford takes the helm from them with gusto, and the result is a sequel that ramps up the humor and vibrancy while preserving key lessons about family and tolerance.

When we last encountered the Crood brood, parents Grug (voice of Nicolas Cage) and Ugga (voice of Catherine Keener) had taken a hipster teen named Guy (voice of Ryan Reynolds) under their wing. Orphaned as a child, he had survived alone in the wild thanks to humanity’s latest discovery, fire. Now, Guy is on a quest to “follow the light” toward a safe haven he calls “Tomorrow.”

Guy’s newfound companions include teenage Eep (voice of Emma Stone), her dimwit brother Thunk (voice of Clark Duke) and their hyperactive toddler sibling Sandy (voice of Kailey Crawford). Rounding out the family is dotty Gran (voice of Cloris Leachman), who provides comic relief rather than wisdom.

As the sequel opens, the Croods are a close-knit “pack” on the move. Guy and Eep have fallen hopelessly in love, making eyes at each other and stealing kisses, all to the strains of the Partridge Family chestnut “I Think I Love You.”

This worries Grug, who fears the lovesick duo will depart and form their own pack. “The only way to survive is if the pack stays together,” he insists.

Fate intervenes when the Croods reach what seems like Guy’s promised land, an oasis of tranquility and abundant produce surrounded by high walls.

Lording over this paradise is the Betterman clan: parents Phil (voice of Peter Dinklage) and Hope (voice of Leslie Mann), and teen daughter Dawn (voice of Kelly Marie Tran). It’s an unexpected reunion for Guy, who grew up next door to the Bettermans. Dawn, in fact, was his childhood sweetheart.

True to their name, the Bettermans are convinced they have evolved to become a more refined version of Neanderthal. Their Zen lifestyle, spa-infused grooming habits and refined table manners are a stark contrast to the behavior of the Croods.

“I don’t know if cave people belong in the modern world,” Hope frets. But Guy is an answer to prayers as a hoped-for mate for Dawn.

Surprisingly, Eep has no time for jealousy. Instead, she’s thrilled to meet a peer and explore the meaning of “girlfriend.” She and Dawn instantly bond, with Eep offering life lessons in the “real” world outside the walls.

“The Croods: A New Age” is a barrel of laughs as it mines the culture clash between the families, who gradually come to understand and respect each other. A few potentially scary, albeit slapstick, moments and a handful of toilet jokes aside, it’s a pleasant escape appropriate for a wide audience.

The film contains cartoonish action and some vaguely scatological humor. The Catholic News Service classification is A-II — adults and adolescents. The Motion Picture Association rating is PG — parental guidance suggested. Some material may not be suitable for children.