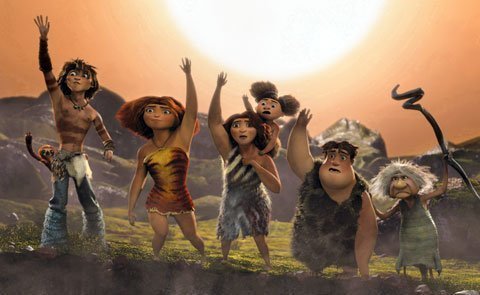 NEW YORK (CNS) — "The Flintstones" on steroids may best describe "The Croods" (Fox). Echoing the premise of the popular 1960s TV series, this 3-D animated comedy follows the rollicking adventures of another "modern Stone Age family."

Written and directed by Chris Sanders ("How to Train Your Dragon") and Kirk DeMicco ("Space Chimps"), "The Croods" is a refreshing change of pace for Hollywood family fare. Its punning title notwithstanding, the film’s humor is not at all crude — there’s not a potty joke within sight (or smell).

Instead, we have a fast-paced, good-humored and beautifully rendered romp that provides fun for moviegoers of just about any age. Only frightening interludes that might overwhelm the littlest viewers pose any concern for parents.

Climate change is in the air, and that fills Crood family patriarch Grug (voice of Nicolas Cage) with dread. Grug is overprotective of his loving wife, Ugga (voice of Catherine Keener), and of their three kids: Eep (voice of Emma Stone), a rebellious teen; Thunk (voice of Clark Duke), an outsized dimwit; and rambunctious toddler Sandy, who growls rather than speaks.

Throw in Grug’s sassy mother-in-law, Gran (voice of Cloris Leachman), with whom he continually feuds, and you have a recipe for dysfunction and chaos.

Every day at sunset, Grug gathers his tribe and together they retreat to the safety of a dark cave. Thanks to him, the Croods are the only family which has survived the terrors of the wild.

But inquisitiveness gets the better of Eep, who wanders off one night, intrigued by a flickering light in the distance. It leads her to a stranger named Guy (voice of Ryan Reynolds). Guy is an orphan who has survived through sheer resourcefulness — and the discovery of fire.

Eep is enchanted by the hunky lad. (Who knew Neanderthals had abs of steel?) But Guy predicts doom and gloom unless the Croods follow his lead to a safe haven he calls "Tomorrow." Grug is suspicious, and resents relinquishing his role as guardian.

When the earth quakes and volcanoes erupt, the Croods have no choice but to join Guy on the ultimate road trip toward their destiny. Awash in psychedelic colors, the many otherworldly landscapes they encounter are reminiscent of James Cameron’s "Avatar."

Whether intentional or not, "The Croods" carries an intriguing Christian subtext. The characters of the title live in fear in the dark. Guy arrives and persuades them to "live in the light" and "follow the sun." Doing so will lead to a kind of salvation as well as a renewal of the bonds of family and friendship.