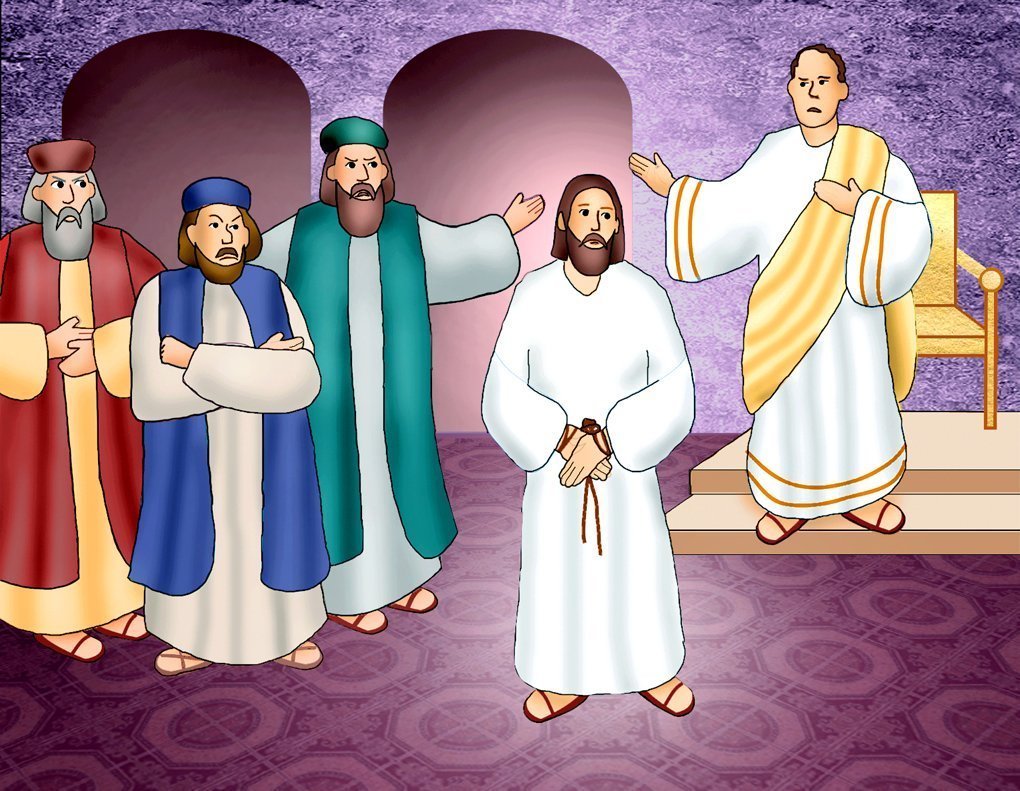 Pilate looked down at Jesus and asked, “Are you the king of the Jews?” Without looking up, Jesus replied, “You say so.”

Pilate spoke to the crowd of people, including the scribes and chief priests who had brought Jesus to him for judgment. “I find this man not guilty,” he said. But the people there were not satisfied. After inquiring whether Jesus was a good man or not, Pilate sent Jesus on to Herod in Jerusalem.

Herod had heard about Jesus, and he hoped Jesus would perform a miracle for him. But Jesus did not do or say anything when Herod questioned him. Herod sent him back to Pilate.

Again Pilate addressed the crowd. “I have conducted my investigation in your presence and have not found this man guilty of the charges you brought against him, nor did Herod, who sent him back to us. … Therefore I shall have him flogged and then release him.”

But the crowd demanded a death sentence. “Crucify him!” they shouted. Pilate, who disagreed, turned Jesus over to the people to do whatever they wanted. Jesus was brought to a place called the Skull along with two criminals. The three of them were crucified, or nailed to a wooden cross until they died.

In spite of all of his suffering, Jesus did not call for the destruction of his tormenters and accusers. Instead he prayed, “Father, forgive them, they know not what they do.”

Some of the people who did not like Jesus mocked him as he hung from his cross. “He saved others, let him save himself if he is the chosen one, the Messiah of God.”

The soldiers that were there also laughed at Jesus and said, “If you are King of the Jews, save yourself.” One of the criminals hanging next to Jesus asked him, “Are you not the Messiah? Save yourself and us.”

The criminal on the other side said, “Have you no fear of God, for you are subject to the same condemnation? And indeed, we have been condemned justly, for the sentence we received corresponds to our crimes, but this man has done nothing criminal.” Looking toward Jesus, this man asked, “Jesus, remember me when you come into your kingdom.”

And Jesus said, “Amen, I say to you, today you will be with me in Paradise.”

READ MORE ABOUT IT:
Luke 23

Q&A
1. What did Pilate ask Jesus?
2. What did Jesus ask his father to do for his tormenters?

<p>After Jesus had started his ministry on earth, he chose and trained 12 men to help him. He also hoped they would continue his work after he had ascended into heaven. These men were called his disciples. The first requirement was for these men to believe in Jesus. These men left their work and traveled with Jesus as he preached around the country. Peter and his brother Andrew were fishermen. We can read more about Peter in the Book of Acts. Matthew was a tax collector, a person most people considered cheats and thieves. But Jesus saw something good in all of his friends. Judas eventually betrayed Jesus. We can be disciples of Jesus, too, by reading the Bible, praying, attending church regularly and showing other people that we live by the guidelines Jesus gave us.</p>

Columban (d. 615) sought the spiritual guidance of a religious woman who had lived in solitude for most of her vocation. She told him that if he found temptation in his own country of Ireland, maybe he should find a new home. Columban decided to pursue a solitary religious life for himself.

He was accepted into a cloistered monastery, where he lived for many years. The time came when Columban and 12 other monks traveled to France on a missionary journey, because so few people there were practicing the Christian faith. They built their first monastery, which was followed by others in Germany, Switzerland and Italy. The guiding principle for the operation of the monasteries was the love of God and neighbors.

For the rest of his life Columban encountered political conflicts with government leaders because his religious teaching was contrary to the way they were living. We honor him on Nov. 23.