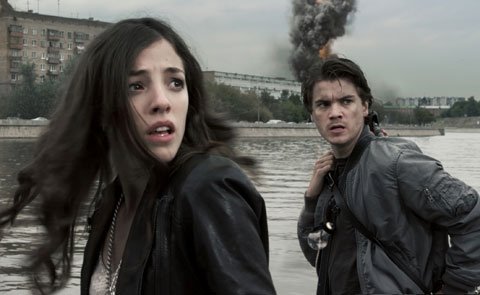 NEW YORK (CNS) — In an earlier era, “The Darkest Hour” (Summit) — a weak entry about five … whoops, four … wait, make that three plucky youngsters running away from invading aliens — would have been marketed as cheap thrills for drive-in moviegoers.
¬†
That era having passed, the flick is instead being retailed as a collection of expensive 3-D thrills, a ploy that only serves to highlight its stale plot. As sketched for us — none too adroitly — by director Chris Gorak and screenwriter Jon Spaihts, said story line depends on characters making bad decisions about going through the deserted streets of Moscow to see whether someone will get blown up by those aggressive intruders.
¬†
Moral behavior, for good or ill, doesn’t enter into it.
¬†
Sean, Natalie, Ben, Anne and Skyler (Emile Hirsch, Olivia Thirlby, Max Minghella, Rachael Taylor and Joel Kinnaman, respectively) are Americans visiting the brightly lit Russian capital for a variety of purposes. Just as everything starts hopping at a noisy disco, though, the aliens, in the form of lethal golden balls of microwave radiation, drop from the heavens like so many untoward versions of Peter Pan’s Tinkerbell,
¬†
They promptly suck all the power from the electrical grid and all electronic devices, and display further bad manners by slaying folks — right, left and center. The first time it happens, it’s perhaps morbidly interesting to see someone explode in a shower of 3-D crystalline flakes. The second, third and umpteenth time, not so much.
¬†
The aliens always give themselves away because their presence makes the lights flicker. So it’s relatively easy to hide from them.
¬†
Viewers of any cinematic taste, however, would be better advised not to seek them in the first place.
¬†
The film contains action violence and fleeting profane, crude and crass language. The Catholic News Service classification is A-III — adults. The Motion Picture Association of America rating is PG-13 — parents strongly cautioned. Some material may be inappropriate for children under 13.
¬†
– – –
¬†
Jensen is a guest reviewer for Catholic News Service.