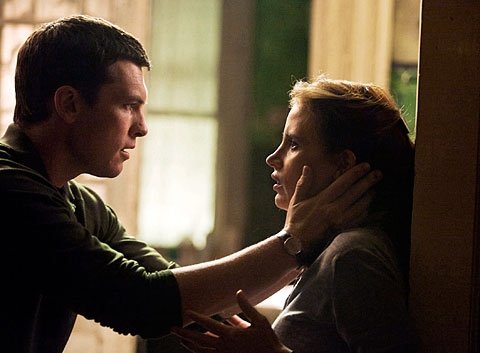 NEW YORK (CNS) — The spy thriller is alive and kicking in "The Debt" (Focus), a stylish — though frequently violent — remake of the 2007 Israeli film of the same name. Directed with flair by John Madden ("Shakespeare in Love"), "The Debt" follows top-rate actors across two time periods in a suspenseful game of cat-and-mouse that will keep mature viewers on the edge of their seats, guessing whether there’s more to the central events than the official story recounts.

Thirty years after their secret mission in the 1960s to capture a Nazi war criminal, three Mossad agents — Rachel (Helen Mirren), Stephan (Tom Wilkinson) and David (Ciaran Hinds) — reunite to tell their tale in a new book. The details of their exploit are told in flashback by their younger selves, portrayed respectively by Jessica Chastain, Marton Csokas and Sam Worthington.

The trio became national heroes by tracking down and capturing Dieter Vogel (Jesper Christensen), the "Surgeon of Birkenau," a Josef Mengele-like monster who killed thousands of Jews, young and old, through viciously inhumane experimentation during the Holocaust.

Vogel is discovered practicing as a gynecologist in 1965 East Berlin. The agents lay a trap with Rachel as bait; she poses as a young bride with fertility issues. Their scenes together in the examination room are squirm-inducing, as Rachel faces the man who murdered — among so many others — her own mother.

Vogel is captured and detained in the claustrophobic apartment the agents occupy, as they await the unfolding of their plan to smuggle him to the West — and to justice. When the first attempt fails, and the delay becomes interminable, patience wears thin. A psychological game begins, with Vogel — the bald, unrepentant face of anti-Semitism — playing the agents off against each other.

Rachel, an emotional wreck, has her judgment further clouded by her romantic feelings for both Stephan and David. Toss in unresolved issues of loss, anger, revenge, justice and honor and you have a deadly mix ready to explode.

While the elements listed below preclude endorsement for all but well-grounded adults open to challenging material, "The Debt" will certainly keep them guessing right to the end.