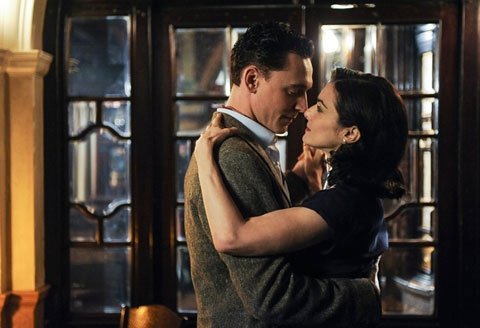 NEW YORK (CNS) — It’s a safe bet that when violins start playing in a film, a big emotional moment is bound to follow. Such is the case with "The Deep Blue Sea" (Music Box); this period drama is punctuated by the soaring strings of Samuel Barber’s 1939 "Violin Concerto."

Based on Terence Rattigan’s 1952 play and directed by Terence Davies ("Of Time and the City"), who also wrote the screenplay, "The Deep Blue Sea" charts a lonely wife’s downward spiral into adultery, divorce and suicide. Whenever caught between the devil and you-know-where, she consistently makes bad, selfish decisions.

Rattigan’s work can be regarded as the trampy sibling of Noel Coward’s 1936 one-act play "Still Life," which was made into the classic film "Brief Encounter" in 1945. Coward’s story concerns an unhappy wife who meets a handsome stranger at a train station. Friendship turns to love; they consider an affair, but in the end decide — sensibly, though with regret — to part.

"The Deep Blue Sea," set in postwar England, takes a more provocative turn. Hester (Rachel Weisz) is depressed, stifled by the propriety of her marriage to Sir William Collyer (Simon Russell Beale). Hers is a privileged existence, lacking nothing but real passion.

Stay away from that, Sir William’s mother (Barbara Jefford), warns. "Beware of passion, Hester — it always leads to something ugly," she says. "Replace it with a guarded enthusiasm."

Mother knows best, but Hester longs for wild abandon. She embarks on a secret affair with the dashing but feckless Freddie (Tom Hiddleston). Sir William finds out, and shows Hester the door, though declaring he will never give her a divorce.

Hester, savoring freedom of a kind, moves into Freddie’s drab apartment, where they masquerade as a happily married couple. She tells her father, an Anglican vicar, who condemns her adultery and tells her to repent. "Return to your husband. Your first loyalty is to him," he says.

Hester cannot; she is addicted to the physical pleasure that was lacking in her marriage. For this, she endures Freddie’s drunkenness and cruelty, admitting, "We’re lethal to each other."

But when Freddie forgets her birthday, Hester snaps, and attempts suicide. This brings on more complications — as well as a surprising rescue offer from her still-smitten husband.

Regrettably, "The Deep Blue Sea" implicitly condones every sin that Hester commits, regarding her free-spirited ways, however egotistical and harmful, as exemplars of women’s liberation. For viewers committed to Judeo-Christian values, on the other hand, Hester is anything but a role model. She’s a vivid warning against self-destructive behavior.

The film contains mature themes, including suicide and adultery, brief nudity, at least one use of profanity and a few crass references. The Catholic News Service classification is L — limited adult audience, films whose problematic content many adults would find troubling. The Motion Picture Association of America rating is R — restricted. Under 17 requires accompanying parent or adult guardian.