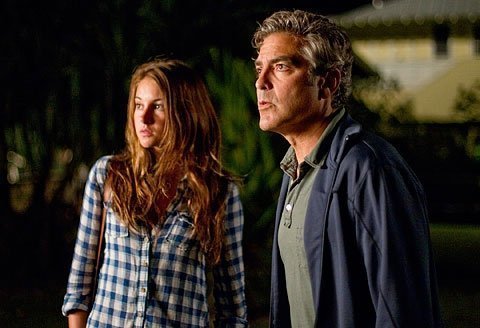 NEW YORK (CNS) — “The Descendants” (Fox Searchlight) is sensitive, thoughtful — and spiritually bereft.
¬†
That’s exceedingly sad, especially considering that the key plot point in this adaptation of the novel by Kaui Hart Hemmings concerns a wife and mother of two young daughters left brain-dead after a boating accident. The fact that she’s made a living will, to which her family feels legally bound, means that any moral exploration of her status is also forestalled.
¬†
Instead, as Elizabeth King (Patricia Hastie) lies motionless in her hospital bed, the audience is called on to watch husband Matt (George Clooney) and daughters Alexandra (Shailene Woodley) and Scottie (Amara Miller) suffer in their various stoic and dysfunctional manners.
¬†
Directed by Alexander Payne, who co-wrote the screenplay with Nat Faxon and Jim Rash, the movie — intended as bitterly comedic — is hostile neither to religion nor to people of faith. It’s just that belief of any sort is conspicuously absent, and the lack of spiritual support — apart from a single conversation with a hospital grief counselor — seems especially cruel to the girls.
¬†
Matt is a successful lawyer in Hawaii. His respective relationships with his two frequently foul-mouthed daughters are strained. At the time of Elizabeth’s accident, he’s already dealing with one familial crisis, since his extended clan wants to sell their ancestral property — held in trust for generations — on the island of Kauai. A resort developer, we learn, has offered them many millions for the pristine beachfront acreage.
¬†
Matt also belatedly discovers — he’s the last to know — that Elizabeth had been having an adulterous relationship with real estate agent Brian Speer (Matthew Lillard). Matt spends much of the running time trying to locate Brian as well as contemplating how to confront him and inform him of Elizabeth’s fate.
¬†
With all of this going on, pathos runs amok, emotions run the gamut and everyone takes turns weeping. Portraying grief on film always earns points for actors’ emotive skills, but this astringent tale of the turmoil provoked by death offers viewers nothing in the way of comfort or resolution.
¬†
The film contains mature themes, including end-of-life issues and adultery; frequent rough and crude language; and fleeting profanity. The Catholic News Service classification is L — limited adult audience, films whose problematic content many adults would find troubling. The Motion Picture Association of America rating is R — restricted. Under 17 requires accompanying parent or adult guardian.
¬†
– – –
¬†
Jensen is a guest reviewer for Catholic News Service.