The Devil Inside - Catholic Courier 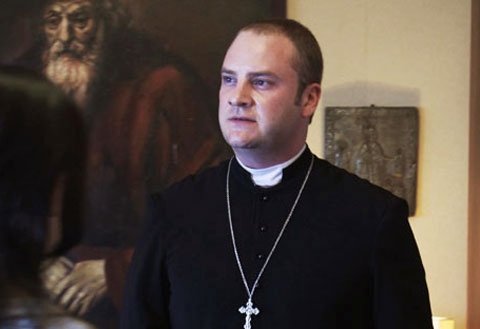 NEW YORK (CNS) — "The Devil Inside" (Paramount), so we’re told, is a film the Vatican doesn’t want you to see. If so, perhaps there’s a "Da Vinci Code"-like conspiracy afoot intended to save you 12 of your hard-earned, economic-downturn dollars.

Those foolhardy enough to insist on wading through this cheap, inept piece of storytelling will experience an eye-poppingly bad, grotesque little horror outing. And that’s not to mention the consistent spewing forth of lazy, sullen antagonism toward the Catholic Church.

The uninformed bias on display, in fact, can be compared not only to the turgid fantasies of Dan Brown but to the loopy visions of anti-Catholic cartoonist and tract churner Jack Chick. Thus one character declares, "In the eyes of the church, what we’re doing is wrong; that’s how we know it’s so right!"

Keen to learn what provoked her mother Maria (Suzan Crowley) to murder two priests and a nun during an exorcism 20 years earlier, plucky documentary maker Isabella Rossi (Fernanda Andrade) jets off to Rome in search of answers, accompanied by her faithful cameraman Mike (Ionut Grama)

While this could be the premise for a faith-friendly (and genuinely terrifying) offering, instead director William Brent Bell, who co-wrote the screenplay with Matthew Peterman, opts to place a mix of poor theology, bizarre conspiracy theories and downright nastiness into the mouths of two rogue priests who ally with the duo of filmmakers in their quest for "truth."

Said clerical types — Ben (Simon Quarterman) and David (Evan Helmuth) — are renegade exorcists who step in when the "institutional," "bureaucratic" church is too cowardly, hypocritical or just plain stupid to grant the possessed the rites that will set them free. Ben — an unshaven, twentysomething Englishman who seems permanently on the edge of forming an "Occupy Vatican City" movement — is particularly outspoken with his prejudices.

Such bigotry is never challenged. Nor does it ever seem to occur to anyone on screen that the church might have good reason to be wary of granting exorcisms. If performed on someone who is mentally ill — as opposed to genuinely possessed — after all, the ritual could potentially cause significant further psychological damage.

The film’s opening proudly proclaims that the Vatican didn’t assist in its production. That’s all-too obvious, given the numerous inaccurate portrayals of both doctrine and practice. These range from made-up rites of exorcism to a blatant misrepresentation of the theology of baptism.

Another distortion is the supposed principle of "demonic transference," whereby an evil spirit can jump from one person to another in a flash, almost like a satanic form of the flu. Carried to farcical extremes, this idea has far less to do with Catholic teaching than with advancing the movie’s halting plot.

Other entries in the genre — such as 1973’s "The Exorcist" and the more recent "The Exorcism of Emily Rose" — inspired fear through implication and tension. Bereft of such subtlety, "The Devil Inside" resorts to loudly cracking bones, enormous amounts of blood and bouts of obscene language — with results more risible than terrifying.

Jensen and Shaw are guest reviewers for Catholic News Service.