The devil is sneaky, so Christians must be watchful, pope says - Catholic Courier 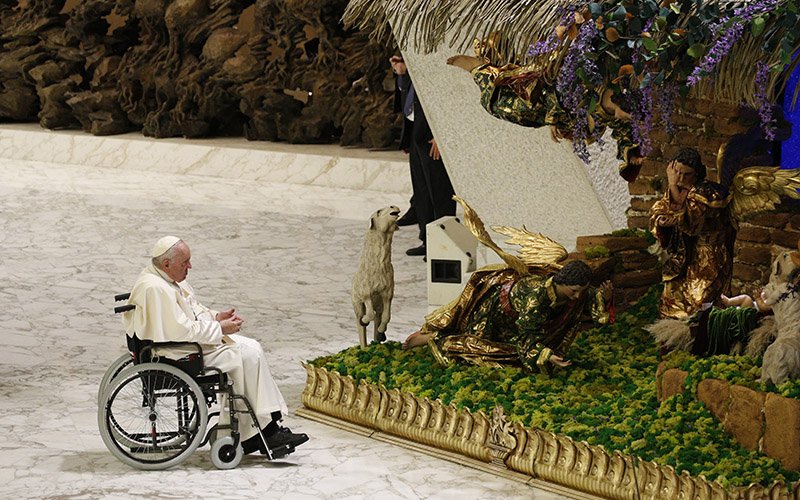 Pope Francis visits the Nativity scene during his general audience in the Paul VI hall at the Vatican Dec. 14, 2022. (CNS photo by Paul Haring)

VATICAN CITY (CNS) — Vigilance is an essential part of the spiritual life because the devil will try to sneak in when one is not paying attention or, especially, when a Christian thinks he or she is making a lot of progress on the road to holiness, Pope Francis said.

“When we trust too much in ourselves and not in God’s grace, then the Evil One finds the door open. So, he organizes an expedition and takes possession of that house,” which is a person’s spiritual life, the pope said Dec. 14 at his weekly general audience.

Since late August, the pope has been using his general audience talks to explain the process of spiritual discernment according to the teaching of St. Ignatius of Loyola, founder of the Jesuits.

When discernment has led to a good decision, one that increases spiritual growth and brings one closer to doing the Lord’s will, he said, the process is not complete.

“If vigilance is lacking,” the pope said, there is “a very high risk that all will be lost. It is a danger not of a psychological, but of a spiritual order, a real snare of the evil spirit.”

Part of discernment is being watchful to safeguard one’s heart and soul, he said. Vigilance “is the frame of mind of Christians who await the final coming of the Lord; but it also can be understood as the normal attitude to have in the conduct of life, so that our good choices, taken at times after challenging discernment, may proceed in a persevering and consistent manner and bear fruit.”

In greeting French speakers at the audience, the pope noted how Advent reminds Christians of the importance of watchfulness or vigilance.

“We await the coming of the Lord, and we remain attentive to our more fragile brothers and sisters who knock at the door of our hearts,” the pope said. “This is how we build our lives with discernment and consistent with the Gospel.”

“Let us ask the Lord to keep us vigilant in humility and in availability” to those in need, he said.

When one does something good, the pope said, there often is a temptation of pride, “the presumption of being righteous, of being good, of having everything in place. Often, we will hear someone say, ‘Yes, I was bad before, but I converted and now my house is in order, thanks be to God,’ and they relax.”

At moments like that, the pope said, the devil will not overpower a person, but will be very “polite” and ask to come in, then he will make himself at home.

“Watch over your heart because vigilance is a sign of wisdom, it is above all a sign of humility” and of knowing that without God’s help, one can fail, the pope said. “Humility is the high road of the Christian life.”