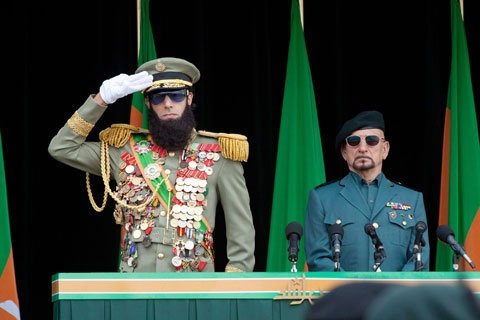 As it turns out, such reckless optimism would indeed be misplaced. A shift from the hidden-camera, ambush-style satire that characterized Cohen’s earlier efforts to a more traditional scripted offering does nothing to prevent his signature antics feeling tedious and recycled. Nor, for that matter, does the change in format involve any corralling of their waywardness.

This time around, Cohen plays Adm. Gen. Aladeen, a composite, but Moammar Gadhafi-like tyrant from the fictional North African nation of Wadiya. After his scheming uncle (Ben Kingsley) uses Aladeen’s state visit to the United Nations as the opportunity to stage a coup, replacing the outrageously bearded goof with a more pliable imposter, the true leader finds himself wandering the streets of Manhattan, whiskerless and penniless.

Taking an alternate identity, he befriends hippy-dippy vegan collective grocer Zoey (Anna Faris), muddles his way into a job at her food store, and plots to retake his title.

Although the premise is workable, and the relationship between the tyrant and the free spirit provides some touching and genuinely funny moments, the rest of director Larry Charles’ comedic portrait amounts to little more than a mix of foul language and gross-out sludge, a combination that produces more winces than laughs.

Curiously, the proceedings culminate with a finger-wagging lecture about the shortcomings of American democracy. This last-gasp aspiration to satiric seriousness, however, falls just as flat as all the puerile cavorting that preceded it.