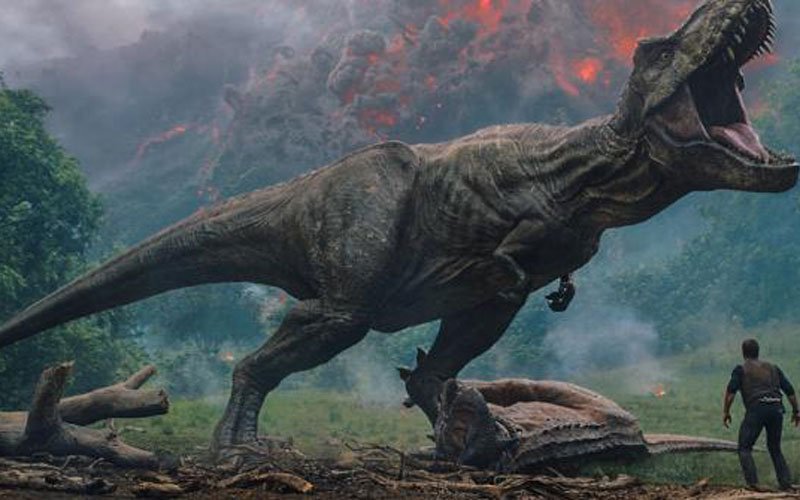 Director J.A. Bayona’s follow-up to the 2015 reboot of the hugely successful franchise ratchets up the mayhem and adds a bit more gore but keeps the on-again, off-again central romance refreshingly innocent.

In this iteration of the series that began with Steven Spielberg’s blockbuster 1993 screen version of Michael Crichton’s 1990 novel “Jurassic Park,” the cloned dinosaurs at the heart of the action are facing extinction due to a volcanic eruption. So Benjamin Lockwood (James Cromwell), the vastly wealthy surviving member of the duo of researchers who used DNA to bring them back from their last disappearance, organizes a rescue.

Through his principal underling, Eli Mills (Rafe Spall), Lockwood recruits Claire Dearing (Bryce Dallas Howard), the former head of the theme park that once featured the outsized critters — and now an activist on their behalf — and Owen Grady (Chris Pratt), an ex-trainer at the same facility, to transport the anachronistic lizards from the island on which they ran amok in the last movie to sanctuary on a more isolated isle.

As the now-split couple dodge both dinos and volcanic debris, their flicker predictably turns back into a flame. But they have more problems to contend with than they realize since there’s a conspiracy afoot to abduct the reptiles and use them as weapons. Eventually, they’ll need the aid of Lockwood’s intrepid granddaughter, Maisie (Isabella Sermon), to thwart this scheme.

As scripted by returning screenwriters Derek Connolly and Colin Trevorrow, the adventure thus kicked off has little to offer beyond the dubious appeal of watching gigantic creatures endanger the principals and chow down on the occasional extra. Perhaps because of all the peril, though, Owen and Claire’s physical interaction is limited to a scene in which he wakes up to find that she’s been sleeping with her head on his shoulder and her hand resting near his heart.

Less charming is a later sequence during which various bad guys get their comeuppance by being first maimed, then ingested by dinosaurs. Given the graphic nature in which some of this is portrayed, “Jurassic World: Fallen Kingdom” cannot be endorsed even for mature teens.

All the more so, since there’s a vaguely anti-religious tone underlying a cameo by Jeff Goldblum in the guise of mathematician Dr. Ian Malcolm. Testifying before Congress about the dinosaurs’ plight, he observes: “God is not part of the equation.”

Maybe he should redo his figures.

The film contains much animal violence with occasional gore and a few gruesome images, some gunplay, a couple of profanities and milder oaths, a single rough and several crude and crass terms. The Catholic News Service classification is A-III — adults. The Motion Picture Association of America rating is PG-13 — parents strongly cautioned. Some material may be inappropriate for children under 13.