The Disappearance of Eleanor Rigby: Them - Catholic Courier 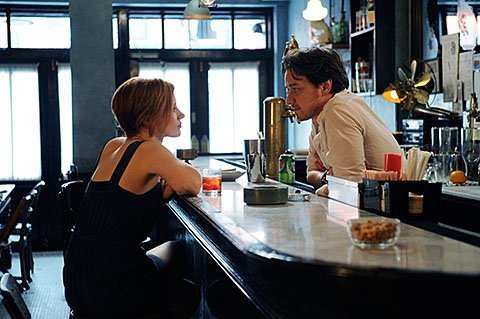 Jessica Chastain and James McAvoy star in a scene from the movie "The Disappearance of Eleanor Rigby: Them." The Catholic News Service classification is A-III -- adults. The Motion Picture Association of America rating is R -- restricted. Under 17 requires accompanying parent or adult guardian.

NEW YORK (CNS) — Beatles fans will be disappointed to learn that, apart from borrowing the title character’s name, "The Disappearance of Eleanor Rigby: Them" (Weinstein) has absolutely nothing to do with the band’s 1966 hit single.

Rather, this is an absorbing and provocative study of grief and its destructive effects on a young married couple.

Written and directed by Ned Benson, the movie is part of a grand filmmaking experiment, a trio of pictures telling the same story about Eleanor Rigby (Jessica Chastain) and Conor Ludlow (James McAvoy). "Them" considers both the main characters’ points of view. Each of its accompanying films — "Him" and "Her" — explores one perspective on the same events.

"Them" opens with a shock. Eleanor, a vivacious redhead passionately in love with Conor, jumps off a Manhattan bridge. She survives, but vanishes, slipping out of the city for sanctuary at her childhood home in Connecticut.

There, Eleanor is cocooned by her quirky parents. Her bohemian mother, Mary (Isabelle Huppert), is a free-spirited Frenchwoman who likes her wine.

Her father, Julian (William Hurt), is a buttoned-up psychology professor desperate to help his daughter put her shattered life back together.

"Tragedy is a foreign country," he admits. "We don’t know how to talk to the natives."

Soon we learn the reason why Eleanor is so depressed: She and Conor had a son who died. The heartache was overwhelming, driving the duo apart — and Eleanor to suicide.

As a distraction, Eleanor returns to the city to take graduate courses. She strikes up a friendship with her sassy professor, Lillian (Viola Davis), who dispenses no-nonsense advice.

In the meantime, Conor is a mess. He’s desperate to find his wife and save his failing business, a dingy restaurant.

To the director’s credit, "The Disappearance of Eleanor Rigby: Them" unfolds at a gentle pace, allowing viewers to appreciate the complexity of the situation. It’s a blend of grand romance and therapy session as Eleanor and Conor seek healing and a path back to their lost love.

Their journey is wrenching. In the end, the audience will sympathize with Conor’s initial plea when he meets his future wife: "There’s only one heart in this body. Have mercy on me."