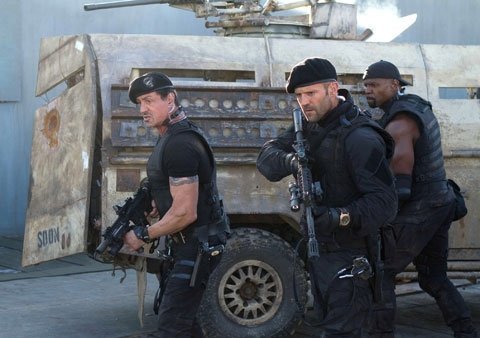 NEW YORK (CNS) — True to its title — and that of its 2010 predecessor — "The Expendables 2" (Lionsgate) is indeed best dispensed with, done without or, in a word, eschewed.

Though director Simon West’s blood-soaked action sequel trots out an array of genre veterans, their appearances only go to show that experience isn’t always the best teacher.

Bruce Willis (first movie circa 1980) gets things rolling when he shows up to task Sylvester Stallone (screen debut 1970) and his titular band of mercenaries with recouping a bit of top secret information that went down in a plane crash.

But villainous — and thus aptly named — Russian gang leader Vilain (Jean-Claude Van Damme, whose Brussels-bred muscles were first sighted on screen in 1984) is out to get his hands on the same intel.

Since the item in question is a blueprint showing exactly where in a vast underground mine a trove of Soviet-era nukes can be found, the Fate of the World now depends on Stallone and his followers. They include Jason Statham, Dolph Lundgren (who also first hit celluloid in the mid-1980s), Terry Crews, Randy Couture and Liam Hemsworth. (Granted, Hemsworth has only been kicking around Hollywood for a few years. But then again, there’s a reason his character is nicknamed Billy the Kid.)

As our heroes tangle with Vilain and his hordes of henchmen, aging action stars become even thicker on the ground with the arrival of Chuck Norris (first, uncredited role 1969) and Arnold Schwarzenegger (initially seen that same year in "Hercules in New York").

Though it serves to relieve the macho insult-trading to which too much of the dialogue in Stallone and Richard Wenk’s script is devoted, the cast’s self-referential and self-deprecating humor fails to retrieve the queasily gore-stained proceedings.

The film contains excessive bloody violence, including torture and decapitation, a vengeance theme, about a dozen crude terms and half that number of crass expressions. The Catholic News Service classification is O — morally offensive. The Motion Picture Association of America rating is R — restricted. Under 17 requires accompanying parent or adult guardian.