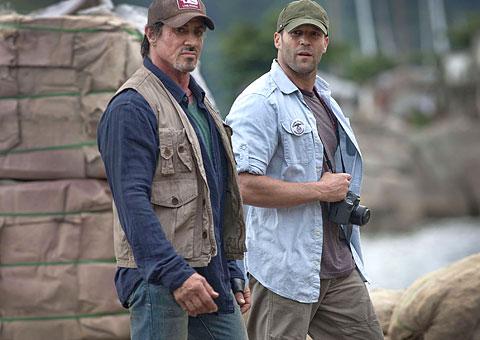 NEW YORK (CNS) — The only thing higher than the body count is the testosterone level in "The Expendables" (Lionsgate/Millennium), a brutally violent action movie that teams, for the first time, some of Hollywood’s biggest tough guys with an assortment of professional sports stars.

The result is "The Dirty Dozen" on steroids, with much more brawn but far less acting chops.

The soundtrack to this very loud film includes the 1970s Thin Lizzy hit "The Boys Are Back in Town," and indeed they are. Leading a band of misfit mercenaries is Barney Ross, played by Sylvester Stallone, who also directed and co-wrote the screenplay with David Callaham. Barney, not surprisingly, combines the wit and sensitivity of Rocky Balboa with the lethal weaponry of Rambo.

The spiritual guru and deal broker for this brotherhood is Tool (Mickey Rourke), a soulful tattoo artist who leaves his mark — literally — on every member.

There’s trouble in paradise — in this case a South American country called Vilena — and Barney and Lee go on a reconnaissance mission. There they find rogue CIA agent James Monroe (Eric Roberts), who has overthrown the government, taken command of the army and set up a corrupt regime financed by drug trafficking.

Monroe’s bodyguards include the aptly named Paine (Steve Austin of World Wrestling Federation fame), and Gunner Jensen (Dolph Lundgren, who battled Stallone in "Rocky IV"). Jensen is a turncoat, thrown out of the Expendables for violating the brotherhood’s strict moral code by his substance abuse.

After blowing up half the capital and shooting everyone in sight, Barney and Lee barely escape with their lives. But Barney is smitten with resistance agent Sandra (Gisele Itie), and he vows to return to Vilena with the entire gang to find her and restore the nation’s freedom.

Despite a slender script and minimal dialogue, "The Expendables" tries to be several films at once. It’s a morality tale of good versus evil, with the promise of redemption for a group of warriors, each of whom has been around the block once too often. It’s also a buddy movie, with Barney and Lee trading tips on dating women in between throwing grenades. Finally, it’s a message picture on freedom and patriotism, with justice dealt out to hostage-takers and enemies of democracy.

Unfortunately, these themes get lost in the sheer chaotic spectacle of the film. "The Expendables" is an assault on the eyes and ears, akin to going 10 rounds with Rocky himself. Under Stallone’s direction, everything gets supersized: People don’t simply get shot; their heads and bodies explode. It’s not enough to blow up one building; the entire town must go.

"The Expendables" is not without a few funny moments, and two uncredited actors nearly steal the show. Bruce Willis plays CIA head Church, who gives Barney his new assignment. And Barney’s rival is Trench, played by the Terminator himself, Arnold Schwarzenegger.

When Church questions Trench’s sour attitude, Barney explains, "He wishes he was president."