The Female Thor: Is She Worthy? - Catholic Courier 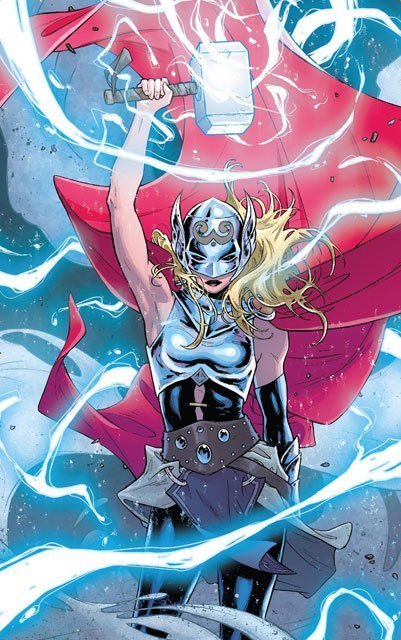 This is an image from the comic book "Thor."

NEW YORK (CNS) — When Marvel Comics announced that they would be transforming Thor, one of their most popular and masculine heroes, into a female character, the response was swift and hostile.

It was another sign of political correctness gone crazy, critics charged. Fans insisted that Thor was, is and always will be exactly what his creators, Stan Lee, Jack Kirby and Don Rico, initially envisioned: a muscled, mighty, hammer-tossing thunder god based on Norse mythology.

Thor Odinson pounds trolls into submission. He lives in the faraway kingdom of Asgard and speaks a kind of Shakespeare-lite. That’s his persona. Period. End of discussion.

But the naysayers seem to have overlooked one thing: the advent of the new female Thor makes for a cracking good story.

According to the mythos behind "Thor," even to lift — much less wield — the enchanted hammer Mjolnir, and thus lead Asgard, the magical weapon’s bearer must be "worthy." Precisely what that term means has been a long-standing subject of debate in the world of comics.

The general outline of worthiness corresponds, however — at least roughly — to the traits most prominent in Thor’s makeup: bravery, loyalty to family, friends and homeland, a ready willingness to defend the weak and vulnerable. (In the 1960s, of course, that latter category was assumed to include women.)

Yet suddenly, as the comic’s current series begins, Thor discovers that he’s no longer fit to deploy Mjolnir. The reason is a mystery, but it has something to do with a sentence that was whispered into Thor’s ear by another Marvel hero, Nick Fury.

In a further twist, Thor’s unwillingly relinquished weapon is taken up by an anonymous character, a woman, who bears it into battle to defend Asgard from a threatening band of evil frost giants.

For seven issues, the identity of this new Thor remained unknown. It has recently been revealed.

Fans anxious to preserve the pleasure of suspense by tackling the latest adventures in order — they’ve just been compiled in hardback and for digital download — should therefore read no further. They’ll find what follows an outright spoiler.

It’s still too early to understand just how and why Jane came to supplant Thor. But writer Jason Aaron and artist Russell Dauterman already have given fans a compelling fresh perspective on characters of five decades’ standing, some of whose storylines were beginning to feel a bit shopworn.

Throughout those years, Thor has been fighting trolls and space monsters while also keeping up a running battle with his stepbrother, Loki. After a half-century of such skirmishing, Thor’s narrative was starting to register as repetitious. With their shift to an understated mystery story, Aaron and Dauterman have managed, at a stroke, to make "Thor" interesting again.

In doing so, they’ve also introduced the admirable subplot that chronicles Jane’s struggle with her illness. While her medical battle undeniably adds moral texture to the story for adult readers, it does introduce material that at least some parents will deem unsuitable for their youngsters.

Among the recent issues reviewed, on the other hand, there’s no sexual content on display, and the comic’s battle scenes can be characterized as more swashbuckling than bloody.

Grown readers may also discern Christian cultural elements in Jane’s story. Clothed in her armor, for example, Jane inevitably recalls Joan of Arc. And Jane’s elevation to the status of a victorious — as well as virtuous — warrior, despite her besieged physical condition, honors the idea that faith and character are more important than raw power.

Dauterman’s artwork is particularly notable. He draws in fine detail, and his rendering of Jane is modest yet powerful. He portrays his heroine as a gallant combatant, not a sex object.

Dauterman also skillfully conveys the outsized dimensions of a world like Asgard. Before the dreaded frost giants actually appear, for example, only parts of them can be glimpsed — as though their figures were too vast to be contained by a mere comic book panel.

When a frightened Jane takes flight, moreover, it recaptures the original thrill of empathy that once made Marvel’s output so electric. Marvel is the home, after all, of flawed but engaging heroes like Spider-Man.

At their best, Marvel’s relatable characters invite us to share in the giddy, disorienting feeling of being a regular person suddenly swept up in transformative abilities. In that respect, Thor’s feminine successor represents a continuation of — not a break from — tradition.

The comics contain scenes of stylized violence and a mature medical theme. The Catholic News Service classification is A-II — adults and adolescents. The Marvel rating system rating is T+ — Teens and Up — appropriate for teens 13 and above. – – – Judge reviews video games and comic books for Catholic News Service.