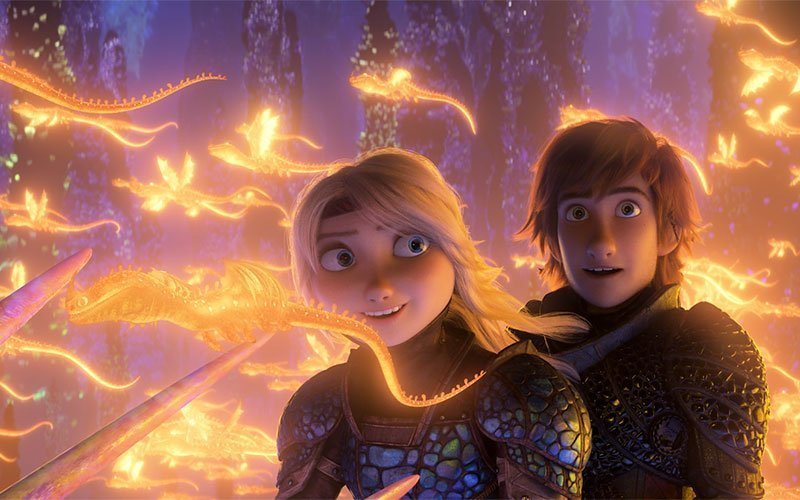 Animated characters Astrid, voiced by America Ferrera, and Hiccup, voiced by Jay Baruchel, appear in the movie "How to Train Your Dragon: The Hidden World." (CNS photo by Universal)

NEW YORK (CNS) — In his 1922 book “What I Saw in America,” the great Catholic writer G.K. Chesterton reflects on how beautiful New York’s Times Square would be for someone who couldn’t read. Similarly, the animated adventure “How to Train Your Dragon: The Hidden World” (Universal) would benefit from being shown without sound.

Visuals are sumptuous, but the story scant as writer-director Dean DeBlois wraps up a trilogy in all three films of which — based on books by Cressida Cowell — he has had a hand. Excessively noisy, frenetic battle scenes and dialogue that often breaks down into wooden declarations so self-satisfied they’re grating only get in the way.

Now the ruler of the community of Vikings whose aversion to dragons he cured, Hiccup (voice of Jay Baruchel), the lad at the center of the franchise, would like nothing better than to concentrate on his ongoing romance with his true love, Astrid (voice of America Ferrera), and on his efforts to liberate captive fire-breathers and create a harmonious utopia populated by both species.

Instead, Hiccup must battle Grimmel (voice of F. Murray Abraham), an implacable enemy to — and hunter of — dragonkind. In pursuit of an old grudge, Grimmel is intent on ensnaring Hiccup’s beloved pet, Toothless.

There’s a melancholy feel to the script’s ultimate lesson in altruism, a mood akin to that evoked by Peter, Paul and Mary’s “Puff the Magic Dragon.” Yet, like the values throughout, this message is in keeping with a Christian perspective.

That’s reassuring since the overall milieu is vaguely pagan. This may be historically justified, insofar as the silly Vikings on screen are in any way related to their rampaging real-life counterparts. And there’s really nothing more to it than the occasional exclamation and a single, silent religious ceremony. Still, parents of impressionable kids should take note.

Timid tots also are not the ideal audience for this movie since, along with the numerous scenes of intense, albeit bloodless, conflict that might prove overwhelming for them, the fate of the good guys often hangs in the balance. That said, this is a feast for the eyes, if not necessarily for the brain, that’s suitable for a wide range of ages.

The film contains characters in peril, much thoroughly stylized combat, mythological references and fleeting childish scatological humor. The Catholic News Service classification is A-II — adults and adolescents. The Motion Picture Association of America rating is PG — parental guidance suggested. Some material may not be suitable for children.