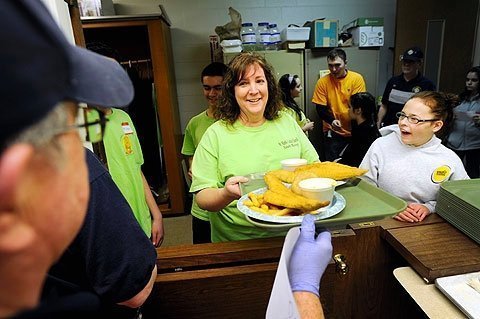 Sue Condoluci (center), youth minister at St. Mark Church in Greece, lends a hand serving meals during a Lenten Friday fish fry at the church March 9. Until 1966 American Catholics were required to abstain from meat every Friday throughout the year.

After abstaining from meat every Friday between Feb. 24 and April 6, Catholics in the United States anticipate a return to normal starting April 13.

But what, exactly, constitutes normal? The actual requirements of church law might be surprising to many — namely, that the obligation of abstinence or some other form of sacrifice applies to Fridays all year long.

Historically, Fridays have been days of penance in recognition of Christ’s death on the cross. Prior to 1966 this meant, in part, abstaining from meat for Catholics ages 7 and older every Friday except for solemnities. In November of 1966 the U.S. bishops waived the Friday abstinence restriction in this country. Yet following in the spirit of an apostolic constitution issued earlier that year by Pope Paul VI, they simultaneously directed that alternative penitential acts be substituted if folks opted to eat meat.

Yet Fathers Kevin McKenna and Lou Sirianni acknowledged that this revision — rather than abolition — of year-round Friday sacrifice seems to have escaped the attention of many Catholics. Instead, they noted, the general perception seems to be that Friday, except during Lent and on Good Friday, is no different than any other weekday.

"Many Catholics (in 1966) saw the headline ‘Catholics no longer required to abstain from meat on Friday under pain of sin,’ but never read the fine print," remarked Father McKenna, pastor of Sacred Heart Cathedral.

Mandatory abstinence on Fridays throughout the year was emphasized in the 1917 Code of Canon Law. Father Sirianni, pastor of St. Mark Parish in Greece, noted that this regulation was observed widely and fastidiously.

"Not abstaining on Friday was a mortal sin — you were going to hell," laughed Father Sirianni, rapping his fist on a table for emphasis.

"It was very strict in our parish (Blessed Sacrament, Rochester)," added Father Frederick Bush, a retired diocesan priest who resides at St. Mark. He recalled with a chuckle that "I went to confession and told the priest I had a little piece of sliced beef, and it was Friday."

Father Sirianni added that tight fasting and abstinence restrictions also existed during Lent and for numerous other religious observances during the year. But in his apostolic letter of February 1966, Paenitemini, Pope Paul VI directed Catholics to put higher priority on acts of prayer and works of piety and charity in their penitential duty. The pope also raised the minimum age for abstinence from 7 to 14, as reflected in Canon 1252 of the 1983 Revised Code of Canon Law.

Paenitemini and Canons 1250 and 1251 stipulate that abstinence on Fridays should continue all year. However, Paenitemini and Canon 1253 also allow bishops’ conferences to determine the specific application of this regulation as it best applies to respective countries and cultures. The U.S. bishops determined that abstinence would only be obligatory on Ash Wednesday, Good Friday and Lenten Fridays although the practice was still strongly encouraged on all Fridays. In fact, the bishops’ November 1966 Pastoral Statement on Penance and Abstinence (No. 24) states: "Even though we hereby terminate the traditional law of abstinence binding under pain of sin, as the sole prescribed means of observing Friday, we … hope that the Catholic community will ordinarily continue to abstain from meat by free choice as formerly we did in obedience to church law."

For those who do wish to consume meat on Fridays, the previous section of the bishops’ document makes clear that alternative forms of penance must be carried out in order to give Fridays their just due: "Friday should be in each week something of what Lent is in the entire year. For this reason we urge all to prepare for that weekly Easter that comes with each Sunday by freely making of every Friday a day of self-denial and mortification in prayerful remembrance of the passion of Jesus Christ."

Many forms of sacrifice

Father Sirianni observed that the U.S. bishops’ decision reflected "a lot of social upheaval at that point" in the United States, amid personal-empowerment movements that called for individuals rather than institutions to make decisions about the individuals’ behavior.

"The bishops had hoped that Catholics would now freely choose to abstain from meat from a motivation of needed self-denial, or substitute something else. Perhaps not enough time was spent on the motivation, and an occasional reminder," Father McKenna said.

Father Sirianni agreed that the bishops’ call for some form of continuing obligation on Fridays was "probably what needed to be stated more firmly" from church pulpits. He and Father McKenna noted that U.S. Catholics also didn’t feel as obligated to enact the new style of sacrifice as they did under the old code’s requirement of Friday abstinence all year.

Father Sirianni said he believes the need for a consistent, uniform style of sacrifice motivated the bishops of England and Wales to reinstitute obligatory abstinence from meat on Fridays year-round beginning Sept. 16, 2011. In their May 2011 announcement, the bishops stated: "The best habits are those which are acquired as part of a common resolve and common witness. It is important that all the faithful be united in a common celebration of Friday penance."

"One of the values of the Friday abstinence is, you had the entire Catholic community doing the same thing on the same day," Father Sirianni said. "There was a sense of unity — ‘We’re going to do this in harmony.’ It reminded you it was a different day."

With abstinence on Fridays other than Lent and Good Friday remaining optional in this country, he suggested ways in which Catholics could better carry out the U.S. bishops’ hopes of 46 years ago: fasting; abstaining from such pleasurable foods as desserts; reading the Bible, particularly a Passion narrative from the Gospels; praying together as a family; attending Mass; and performing general acts of kindness.

Giving to charity is a worthy option as well, Father Bush added. He and Father Sirianni noted they both continue to reguarly abstain from meat on Fridays.

"It could be any number of things which says I’m doing something out of the ordinary," Father Sirianni remarked.