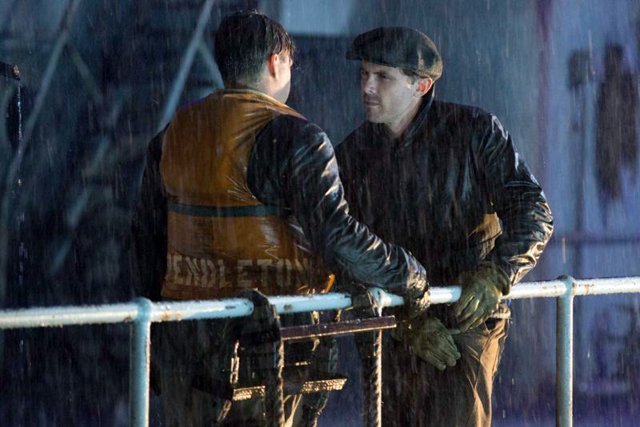 Casey Affleck and Michael Raymond-James star in a scene from the movie "The Finest Hours." The Catholic News Service classification is A-III -- adults. The Motion Picture Association of America rating is PG-13 -- parents strongly cautioned. Some material may be inappropriate for children under 13.
By Joseph McAleer
Catholic News Service
NEW YORK (CNS) — The remarkable true story of the most daring small boat rescue mission in Coast Guard history comes to the big screen in "The Finest Hours" (Disney).
In February 1952, a powerful Nor’easter struck the Massachusetts coast, pummeling shoreline towns and wreaking havoc on ships caught in its deadly path. Among these were two oil tankers bound for Boston, the S.S. Mercer and the S.S. Pendleton.
Beset by 60-foot waves and hurricane-force winds, both vessels broke apart. The Mercer, its bow intact, radioed for assistance and was the focus of a major rescue operation.
The Pendleton was not so lucky. The bow and its radio sunk, stranding 36 sailors in the stern, bobbing like a cork in the mighty sea. With no SOS, who would come to their aid?
By chance, the Pendleton pops up on radar at the Coast Guard station in Chatham, headed by Warrant Officer Daniel Cluff (Eric Bana). Despite extreme conditions, he orders Boatswains Mate 1st Class Bernie Webber (Chris Pine) to muster three men and set out in a wooden 36-foot lifeboat, certainly no match for the storm conditions.
Duty and honor prevail, as Seamen Richard Livesey (Ben Foster), Andrew Fitzgerald (Kyle Gallner), and Ervin Maske (John Magaro) volunteer for duty.
Fellow officers try to dissuade Webber, calling the rescue a suicide mission. Webber’s newly minted fiancee, Miriam (Holliday Grainger), is frantic with worry, compounded by the fact that she is terrified of the water (then why marry a sailor, one wonders?).
"In the Coast Guard they say, ‘You gotta go out,’" Webber reminds his crew. "They don’t say, ‘You gotta come back in.’"
As the lifeboat sets out, a David in search of a Goliath, disaster strikes with the first wave. The craft nearly capsizes, and the onboard compass is lost.
With no navigation aid, Webber must pilot in the blind, relying on faith, instinct and a whole lotta luck to find the wreck.
Meanwhile, aboard the Pendleton, engineer Ray Sybert (Casey Affleck) takes command of the crisis situation. The stern section is slowly sinking, so the survivors must improvise a way to buy precious time while they steer the stern toward land.
"The Finest Hours" is old-fashioned moviemaking on a grand scale. Director Craig Gillespie ("Million Dollar Arm"), working from the 2009 novel by Michael J. Tougias and Casey Sherman, strikes the right balance between striking renderings of Mother Nature’s fury (even more impressive than 2000’s "The Perfect Storm"), and quieter moments, conveying fear and dread among the rescuers and the rescued.
Happily, Gillespie makes time to show the close-knit community joining in prayer, and an individual fingering a rosary.
As for all that water, bring along your sea legs. The storm sequences are intense and immersive (especially in 3-D), and could have you reaching for the sick bag.
The film contains extreme storm-based action and scenes of peril, and some crude and profane language. The Catholic News Service classification is A-III — adults. The Motion Picture Association of America rating is PG-13 — parents strongly cautioned. Some material may be inappropriate for children under 13.
– – –
McAleer is a guest reviewer for Catholic News Service.
Copyright © 2023 Catholic News Service, Inc. All rights reserved. Linking is encouraged, but republishing or redistributing, including by framing or similar means, without the publisher's prior written permission is prohibited.