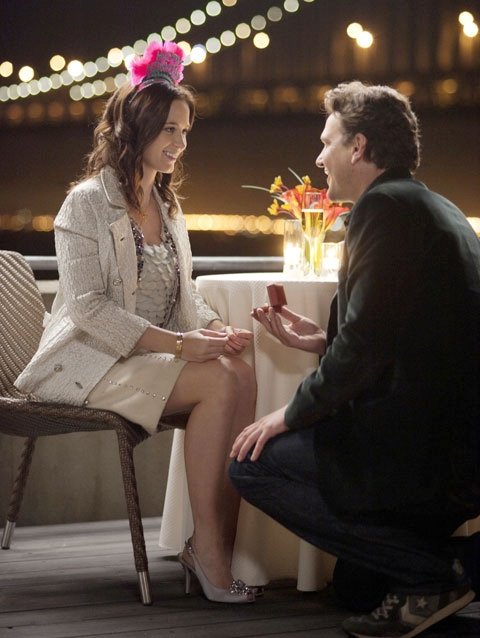 NEW YORK (CNS) — An impoverished presentation of marriage is the principal, but not the only, problematic aspect of director and co-writer Nicholas Stoller’s "The Five-Year Engagement" (Universal). His romantic comedy tracks San Francisco sous chef Tom Solomon (Jason Segel) and his English fiancee Violet Barnes’ (Emily Blunt) as they struggle to get themselves down the aisle.

After a bumpy proposal, the happy couple announces their engagement, only for Violet to be offered her dream job: a postdoctoral position in social psychology at the University of Michigan. Her caring hubby-to-be realizes that this is the opportunity of a lifetime. So the already cohabiting couple delays the nuptials and makes for Ann Arbor.

Career development is hardly the sole source of conflict for the duo. Jealousy, ambition, an errant crossbow and even the odd lecherous Welshman (Rhys Ifans) also get in the way of their happily ever after.

Stoller’s picture has its touching moments, and a genuinely uplifting conclusion that shows love trumping materialistic concerns. But a deficient understanding of matrimony — sadly characteristic of contemporary society — undermines his script, written in collaboration with Segel.

Along with their premature physical interaction, Tom and Violet’s misguided desire to make sure their relationship is perfect before they take their vows is one symptom of the problem. Another is the near-total lack of any religious dimension to their splicing.

The screenplay never resolves a very basic question: How can what they view as a mere public commitment ceremony help Tom and Violet work out their relationship difficulties?

This blinkered attitude leads to a scene in which Violet presents Tom with a set of potential wedding celebrants. She describes them as Jewish, Christian, "Extreme Christian," Buddhist, and "Justice of the Peace." Tom gets 10 seconds in which to choose among these possibilities so that he and Violet can then move onto their next (presumably more important) choice.

This "drive-thru" outlook on what is meant to be a lifelong union could only be made more obvious if a pimply teenager appeared to ask if they’d like fries with their minister.

In the absence of any moral compass that might guide it, the screenplay flounders around searching vainly for the point of it all. The consequence is a meandering plot that lasts at least 30 minutes too long, made all the worse by coarse, wince-inducing sexual gags.

Add to that the dialogue’s excess of foul language and what you’re left with is a thoroughly distasteful slice of stale cinematic wedding cake.