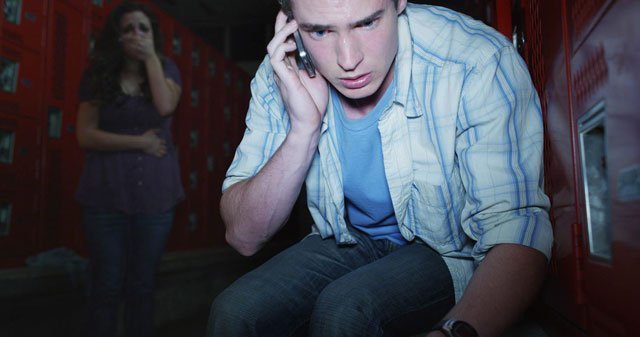 Pfeifer Brown and Reese Mishler star in a scene from the movie "The Gallows." The Catholic News Service classification is A-III -- adults. The Motion Picture Association of America rating is R -- restricted. Under 17 requires accompanying parent or adult guardian.

NEW YORK (CNS) — As if the average high school weren’t a scary enough venue already, "The Gallows" (Warner Bros.) adds a ghost to the mix. Though little blood flows as this noose-toting specter stalks the locker-lined halls, there’s not much brainpower on display, either.

Still, with vulgarity as well as gore mostly held back, parents can feel reasonably comfortable allowing real-life secondary students, at least mature ones, to sign up for this inept panic-fest.

Co-writers and directors Chris Lofing and Travis Cluff certainly don’t earn high points for originality by presenting their tale as a collection of found footage. And the logical trap they’re thereby setting for themselves should be obvious.

Teens in the age of YouTube and the selfie may be all too addicted to their handheld devices –and to the belief that no moment, however trivial, should go undocumented. Yet, when pursued by a homicidal wraith, would their natural response truly be to run, scream and keep shooting?

That’s the strategy that keeps us up to date with the quartet of youngsters at the heart of these proceedings. Much to the annoyance of his snide teammate Ryan (Ryan Shoos), football jock Reese (Reese Mishler) has turned temporary thespian in an effort to win the heart of drama maven Pfeifer (Pfeifer Brown). Watching it all from the sidelines, perhaps with an interest in Ryan — or is it Reese? — loiters cheerleader Cassidy (Cassidy Gifford).

Realizing that he’s no Olivier, Reese allows Ryan to convince him, on the eve of opening night, that the best way to forestall humiliation would be to sneak into school after hours and wreck the set. Overhearing this plan, Cassidy insists on tagging along. Inconveniently, Pfeifer also turns up just as the sabotage is getting under way.

What all four have apparently failed to take into account, however, is the fact that the play in which Reese and Pfeifer are due to star has a troubling history. Exactly 20 years ago, a student at their school suffered a violent and mysterious death during a performance of this costume drama when a prop version of the titular scaffold worked all too well, leaving the poor lad, well, hanging.

So the lights go out and there are loud footsteps and inexplicable noises, and a mocking invocation of the name of the deceased turns out to be a dangerous as well as tasteless pastime. All of which adds up, in the end, to a degree of tedium some moviegoers may not have experienced since their last algebra class.

The film contains considerable stylized violence, some gruesome images, at least one use each of profanity and rough language as well as occasional crude and crass terms. The Catholic News Service classification is A-III — adults. The Motion Picture Association of America rating is R — restricted. Under 17 requires accompanying parent or adult guardian.