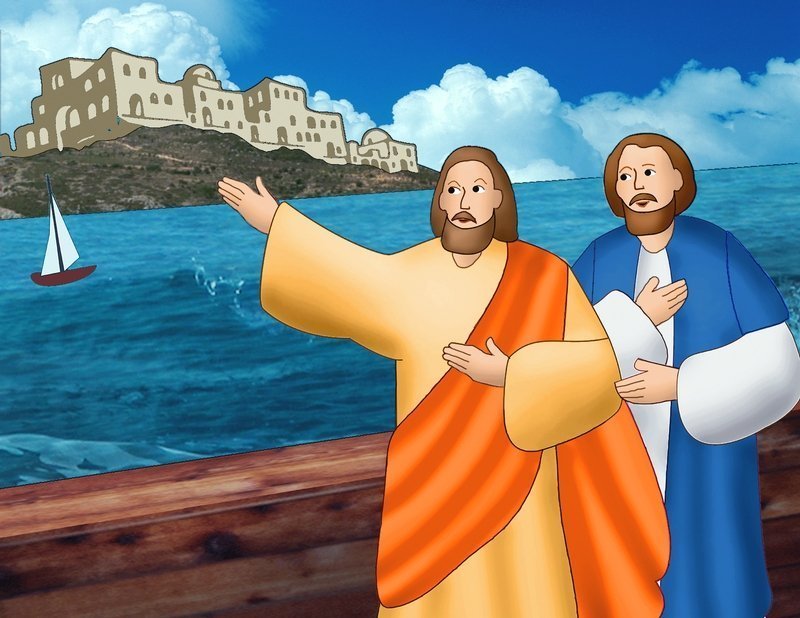 After Peter had a vision from God, the followers of Jesus started preaching the good news of the Lord not only to the Jews, who did not always believe, but also to the gentiles. The gentiles were non-Jews who believed in false gods.

The Holy Spirit told the apostles that Paul and Barnabas were being called to do some special work. The two men were blessed by their friends before taking off on their first missionary journey to the cities where the gentiles lived.

When they preached in Iconium, which is located in present-day Turkey, they converted many gentiles and even some Jews to Christianity. After a while, the Jews living in Iconium who did not believe in Jesus made people mad at Paul and Barnabas. The two men fled the city before they were killed.

Their next stop was Lystra, also in what is now present-day Turkey. There they met a man who was crippled since birth. He had never taken a step in his entire life.

The man was in the crowd of people listening to Paul’s preaching. Paul noticed the man and saw that he had faith.

“Stand up straight on your feet,” Paul told him.

The man jumped up and began to walk around. The other people who had gathered around Paul to hear him speak were amazed. But, since they believed in false gods, they did not understand the miracle Paul had performed was not through his own power, but through the power of God and Jesus. Instead, they thought Paul himself was a god.

“The gods have come down to us in human form,” they shouted as the crowd went wild.

Paul and Barnabas began to shout that they were not gods, only men.

Just then, some of the Jews from Iconium came and made the crowd turn against Paul, who was stoned and dragged from the city. Paul survived, and he and Barnabas continued on their journey, traveling to many other gentile cities.

The two men also strengthened the other followers of Jesus, telling them not to give up their preaching.

“It is necessary for us to undergo many hardships to enter the kingdom of God,” they said.

1. What miracle did Paul perform in Lystra?

2. Who did the people of Lystra think Paul was?

“You are well aware that from early days God made his choice among you that through my mouth the Gentiles would hear the word of the gospel and believe,” he said. “And God … bore witness by granting them the holy Spirit just as he did us. … Why, then, are you now putting God to the test by placing on the shoulders of the disciples a yoke that neither our ancestors nor we have been able to bear?”

“It is my judgment, therefore, that we ought to stop troubling the Gentiles who turn to God,” he said, “but tell them by letter to avoid pollution from idols, unlawful marriage, the meat of strangled animals, and blood.”

“If you keep free of these, you will be doing what is right,” they told the gentiles.