The gift of piety: Compassion to be shared - Catholic Courier 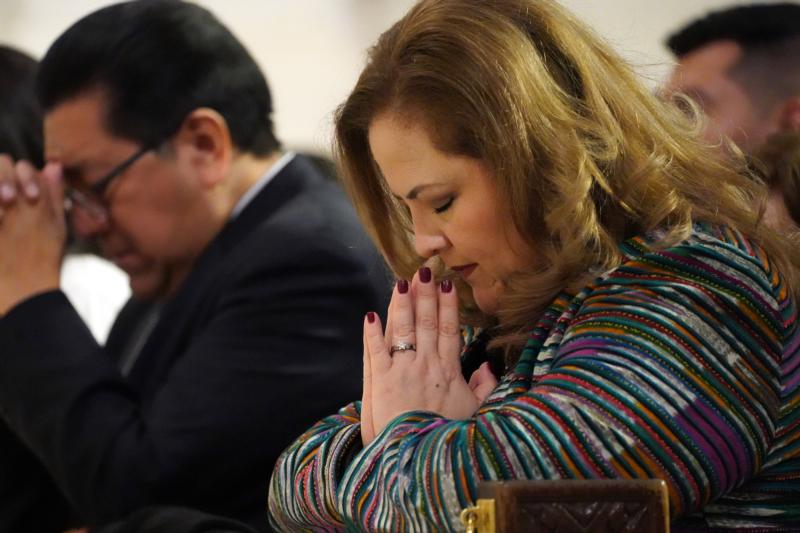 Rosemary Arauz, Guatemala's consul general in New York, prays during a special Mass in honor of the Black Christ of Esquipulas, Guatemala, at St. Patrick's Cathedral. (CNS photo by Gregory A. Shemitz)

Why the gift of piety is more than it may seem

It was raining hard the day our son, then a high school freshman, encountered a rain-drenched student he did not know but who, unlike him, had no umbrella to get through the rain to her next class.

“Would you like to share my umbrella?” our son asked. The young woman smiled gratefully and not only accepted his offer but invited him to join a lunchtime club with her friends.

Our son gladly accepted her offer and ate lunch regularly with her club. It would be nice to say that the friendships remained, but the young woman and her friends were seniors who soon graduated, leaving our son to make new friends (which he did).

It would also be nice to say that our son, in offering the umbrella, was practicing values he learned by going to church, except that it’s more likely he simply did what he instinctively knew was right — share what he had with someone in need.

And that is something to reflect on when we consider the gift of piety. For what good is a gift of the Holy Spirit if it is not shared?

Piety is often connected to “being pious,” connoting images of clasped hands, closed eyes and bent knees in prayer before the Blessed Sacrament, sacred relics or a crucifix. All well and good since, in a religious context, piety connotes reverence and devotion to God.

But in a Catholic context, piety also emphasizes our reliance on God, on recognizing and appreciating God’s many gifts. And that suggests humility.

At a June 2014 general audience in Rome, Pope Francis — as part of a series of weekly discourses on the gifts of the Holy Spirit — declared that the gift of piety “makes us gentle, makes us calm, patient, at peace with God, at the service of others with gentleness.”

I find this an especially powerful and humbling reminder of how to be a true disciple of Jesus, who consistently modeled humility during his earthly ministry.

Yes, I can go to church and pray for hours, pray for all in need, pray for peace and healing throughout the world. And there’s nothing wrong with that — but that’s not where piety ends.

St. Bonaventure, in his “Prayer for the Seven Gifts of the Holy Spirit,” implores, “Grant us piety, by which we may acquire compassionate hearts.”

The pope’s words reflect Jesus’ admonitions to his followers on what discipleship means (Mt 25:40: “Whatever you did for one of these least brothers of mine, you did for me”) and what it does not (Mt 6:5: “Do not be like the hypocrites, who love to stand and pray … so that others may see them”).

If piety means compassion, there are many people I know, starting with my wife, who have the gift of piety in abundance, who are instinctively compassionate to those in need, who seem to know without even asking what needs to be done. And, if they don’t, their first words are, “Tell me what I can do,” not, “Gee, that’s a shame.”

For much of my life I was a “Gee, that’s a shame” Catholic, and it took me a while to become a “Tell me what I can do” Catholic. The challenge to minister with a “compassionate heart” is ongoing.

It helps, though, to consider compassion and the piety from which it emanates as, like all God’s gifts, something to be shared. Because that which brings joy and comfort — like an umbrella on a rainy day — must be shared.