The Girl with the Dragon Tattoo - Catholic Courier 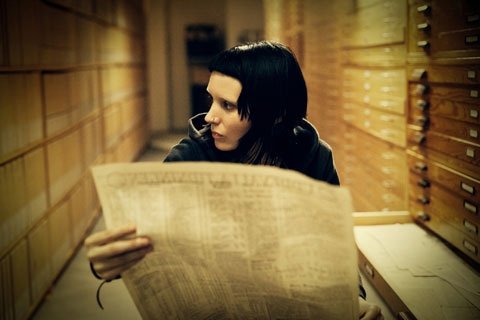 The mixture of sympathy and unease she triggers was ably captured in the 2009 Swedish-language film version of Larsson’s first volume — and it also marks American director David Fincher’s piercingly violent and sordid adaptation of the same tome: "The Girl with the Dragon Tattoo" (Columbia).

The circumstances and choices that render the title character so compellingly complex — most notably, the heinous physical abuse she suffers and then vengefully commits — are precisely what make this chilling crime thriller morally unsuitable. Menacingly gray and caustic, the world in which Lisbeth finds herself appears devoid of fixed ethical coordinates.

An intricately plotted whodunit, "The Girl with the Dragon Tattoo" pits corrupt elements from Sweden’s establishment against relatively disenfranchised individuals who have the skills to buck the old guard plus fend off most every other type of malefactor. Their own values are hardly above reproach, however.

His reputation in tatters following a libel trial, financial writer Mikael Blomkvist (Daniel Craig) is hired by industrialist Henrik Vanger (Christopher Plummer) to investigate the disappearance of his niece 40 years prior. Henrik suspects members of his own fractious, secretive clan.

After laboring on his own for a time, Mikael joins forces with talented researcher and computer hacker Lisbeth (Rooney Mara), a 23-year-old ward of the state who is sexually exploited by her government caseworker Bjurman (Yorick van Wageningen).

Anti-social in the extreme, and sporting an array of punkish piercings and tattoos, Lisbeth has a brilliant mind and is adept at electronic surveillance and other fact-finding methods, many of them illegal. As the narrative moves back and forth between Stockholm and the remote island where the Vanger family resides — and between the present day and the 1960s — Lisbeth and Mikael discover that a serial killer may have been at work.

Fincher’s proficiency in communicating the obsessive zeal that often drives investigative work, so evident in his film "Zodiac," finds a perfect match in Larsson’s book. So too does the director’s ability to translate the use of computers into an enthralling story, as he did in last year’s "The Social Network."

Nevertheless, his exactitude regarding procedure and atmosphere can become exhausting, to the degree that we begin to empathize with the tremendous acting ensemble. Fincher and screenwriter Steven Zaillian don’t flinch from explicitly re-creating the book’s savage and graphic episodes, and it can’t have been easy to take part in many of the scenes — which are excruciating enough just to watch.

After a measured start, during which it initiates a riveting tale of evil exposed and thwarted, "The Girl with the Dragon Tattoo" soon crosses the line into degradation. Lisbeth’s vengeful decisions in response to her unfortunate plight, together with Mikael’s own moral lapses (including adultery) undermine their quest for justice.

In addition, there’s an antireligious motif manifest in the demonic crime spree, Mikael’s skepticism about his teen daughter’s Christianity, and in the Vanger family’s attitude toward faith.