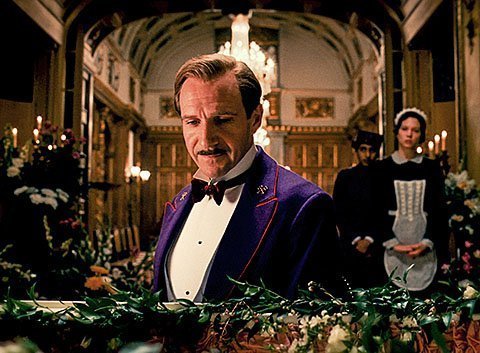 Ralph Fiennes stars in a scene from the movie "The Grand Budapest Hotel." The Catholic News Service classification is A-III -- adults. The Motion Picture Association of America rating is R -- restricted. Under 17 requires accompanying parent or adult guardian.

As a collection of deadpan segments, it’s likely to please Anderson’s fans. However, this saga of a European concierge who dreams of lost grandeur and romances his hotel’s aging female clientele, recounted like a fable, is without a moral or even a clear ending. So non-devotees should consider themselves warned.

In the fictional East European country of Zubrowka in the 1930s, Monsieur Gustave (Ralph Fiennes) is said concierge; lobby boy Zero (Tony Revolori) is his protege. Gustave teaches Zero all the fine points of elegant catering to guests, while spending the rest of his time wooing rich ladies.

Gustave barks orders such as, "Run to the cathedral of Santa Maria Christiana in Brucknerplatz. Buy one of the plain, half-length candles and take back four kublecks in change. Light it in the sacristy, say a brief rosary, then go to Mendl’s and get me a Courtesan au chocolat. If there’s any money left, give it to the crippled shoeshine boy."

That’s kind of cute, but the moment doesn’t lead anywhere beyond the snappy patter. Instead the proceedings devolve into a dark comedy.

One of Gustave’s elderly ladies, Madame D. (Tilda Swinton) dies under mysterious circumstances and bequeaths him a valuable painting, "Boy With Apple." Gustave spends the rest of the film trying to retrieve the painting from her outraged relatives, being framed for murder, escaping prison and attempting to withstand the growing Fascist storm with his charm.

A summoning of the Society of the Crossed Keys, a secret group of super-efficient hotel managers, is an excuse for a host of cameos including Bill Murray, Fisher Stevens and Bob Balaban.

Since the story is related in 1968 by an older Zero, now called Mr. Moustafa (F. Murray Abraham), it’s not clear in whose imagination the story is taking place. And Anderson evidently isn’t interested in explaining this either.