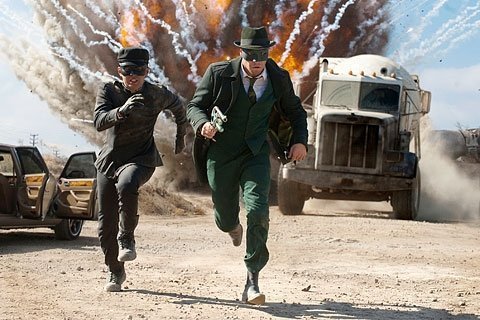 NEW YORK (CNS) — Comedy gone rancid is so painful to watch, especially when the audience is asked to believe that the hero of the piece is a lovable, good-hearted guy when, in fact, he’s an incompetent and amoral dimwit.

Such is the potty-mouthed botch that is "The Green Hornet" (Columbia), an update of the familiar story of the masked crimefighter with his Asian sidekick Kato and tricked-up car nicknamed Black Beauty.

Director Michel Gondry — working from a script by Seth Rogen, who stars, and Evan Goldberg — melds unlikable characters, occasional racist outbursts and a numbing procession of car crashes into a fetid stew.

The problem goes back to the original conception of the titular character, the central figure in a long-running franchise that began as a Golden Age radio drama in the 1930s and went on to include movie serials, a 1960s television show (with Bruce Lee as Kato) and a flurry of comic books issued across the decades.

By day, the Green Hornet is respectable newspaper publisher Britt Reid; by night, he’s a disguised vigilante crimefighter who works outside the law. The police think he’s a criminal, but in reality the Green Hornet pits bad guys against one another, leading to their mutual destruction.

This setup requires a straightforward presentation with great finesse from both script and actor. Both incarnations of the character should have a certain suave appeal.

Instead, Rogen plays both as an overprivileged, vulgar-tongued doofus.

When he’s not leering at his secretary, Lenore (Cameron Diaz), and bullying subordinates at the Los Angeles newspaper he inherited from his father, he’s spouting demeaning and immature comments at sidekick Kato (Jay Chou). Stereotyped Kato, an expert kung fu fighter, goes from making incredible cappuccino to inventing all manner of high-tech crimefighting gear.

The standout among these is a 1965 Chrysler Imperial rendered bulletproof and brandishing every explosive weapon short of an atomic bomb.

But when unsuspecting police give chase and Black Beauty leaves them wrecked all over the highways, the result is cynical nihilism, rather than the kind of carefree fender-benders that might evoke, say, "Smokey and the Bandit."

Even the villain Chudnofsky (Christoph Waltz) — a gangster attempting to take over the city’s drug trade — is played for laughs, and corrupt district attorney Scanlon (David Harbour) equally so. By the time the film descends to a lengthy road chase that ends in the newspaper pressroom (print is still king in this movie!), it’s an insensate mess.

The film contains much gun and martial-arts violence, a vigilantism theme, one scene of implied premarital sex, occasional profanity and pervasive crude and crass language. The Catholic News Service classification is L — limited adult audience, films whose problematic content many adults would find troubling. The Motion Picture Association of America rating is PG-13 — parents strongly cautioned. Some material may be inappropriate for children under 13.