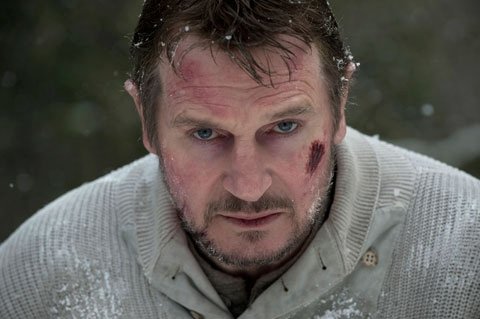 NEW YORK (CNS) — "The Grey" (Open Road) respectfully obeys the immutable law of all story lines in which an aircraft crashes in the Arctic: Some folks are bound to get eaten.

This film, however, with its slight spiritual bent, ducks the cannibalism cliche and makes wolves the hungry ones. The animals are doing what they’re supposed to do by nature, stalking the survivors to thin out the human herd — the better, in the end, to kill them all.

That misfortune is significantly compounded by the fact that they’ve come down too close to the wolves’ den, leaving them targeted as invaders.

As directed by Joe Carnahan — who co-scripted with Ian Mackenzie Jeffers from Jeffers’ short story "Ghost Walker" — the chases, killings and feats of courage are brisk but routine. The script’s attempts at profundity and spiritual reflection, moreover, are wildly uneven.

These oil-rig workers don’t just swear constantly and fight among themselves as they dodge their predators. Each evening around the fire, they also debate the meaning of this life and the prospects for life after death. Additionally, they demonstrate a great deal of respect for those who perished in the crash.

As the film opens, Ottway is shown to be so lonely and depressed over missing his (unnamed) wife — Anne Openshaw, seen in flashbacks — that he attempts suicide. The crash thrusts him instantly into a strong leadership role. But he eventually proves to be a fatalist, inspired by a Kiplingesque poem his father wrote that ends, "Live and die on this day."

Toward the end, Ottway gazes into the slate-colored sky and — as though following the advice of Job’s friends — curses God. He does so, moreover, with a vocabulary very far from scriptural.

His vulgarly phrased sentiments register as more macho defiance than genuine blasphemy. And the extremity of his circumstances mitigates both his blameworthiness and the potential real-life impact of his example.

But this climactic moment is the strongest element among several that, taken together, make this survival story as much a morally inhospitable wilderness as its setting is a natural one. Given the meager rewards of trekking through it, even most adults would be well advised to decline the journey altogether.

The film contains troubling themes — including suicide and one character’s blasphemous expression of despair — frequent gory animal attacks, at least one use of profanity and pervasive rough, crude and crass language. The Catholic News Service classification is L — limited adult audience, films whose problematic content many adults would find troubling. The Motion Picture Association of America rating is R — restricted. Under 17 requires accompanying parent or adult guardian.

Jensen is a guest reviewer for Catholic News Serv