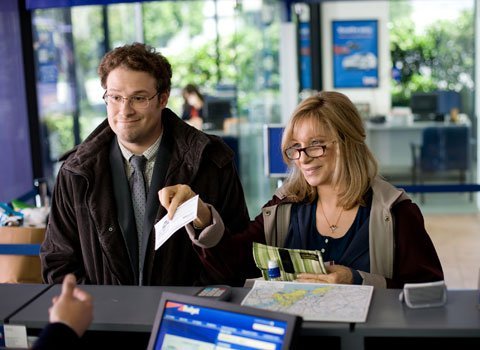 NEW YORK (CNS) — The inevitable tensions of family life have served as the basis for many a screen comedy. In the current holiday season alone, they provide grist for two very different cinematic mills: the crude misfire "This Is 40" and the warmhearted mother-and-son road movie "The Guilt Trip" (Paramount).

Though the latter includes material for mature eyes only, it offers a view of clan interaction that calls to mind St. Paul’s inspired insight that the first — and perhaps primary — attribute of real love is patience (1 Cor. 13:4).

Learning that lesson as the film unspools is buttoned-up Los Angeles chemist Andy Brewster (Seth Rogen). Visiting his New York-based mom Joyce (Barbra Streisand) before setting off on a cross-country business trip — during which he’ll be pitching a cleaning product he invented to various store chains — Andy discovers a secret about her past: Before she married long-deceased dad, Joyce had a boyfriend for whom she still carries a nostalgic torch these many years later.

This being the age of Google, a moment’s research on Andy’s part, once he’s alone in his room — together with a follow-up phone call — reveals that Joyce’s former beau is alive and well, single, and living in San Francisco. Andy decides he’ll secretly engineer a reunion by inviting Joyce along on his journey, and pretending that his last appointment is in the City by the Bay. Needless to say, doting Mom is thrilled by the idea.

Not all the adventures that ensue make for family viewing, notably an unintended stop-off at a roadside strip club. But the vibrant mutual affection between the two main characters shines through as they try to reconcile their ill-matched temperaments.

Extrovert Joyce repeatedly runs afoul of Andy’s love of the laid-back, and frequently elicits wry observations from him on the eccentricity of her outlook. A creative researcher, but no salesman, Andy could benefit from Joyce’s common touch, but bearishly refuses to listen to her advice.

As a dedication included in the end titles hints, and publicity materials for the film explain more fully, screenwriter Dan Fogelman found inspiration for his script in a real-life excursion he and his mother — also named Joyce — undertook together.

By turns amusing and touching, director Anne Fletcher’s picture, which sees both Streisand and Rogen in top form, registers as enjoyable fare for grownups.

The film contains brief partial nudity, numerous adult references, a couple of uses of profanity as well as at least one rough and about a dozen crude terms. The Catholic News Service classification is A-III — adults. The Motion Picture Association of America rating is PG-13 — parents strongly cautioned. Some material may be inappropriate for children under 13.