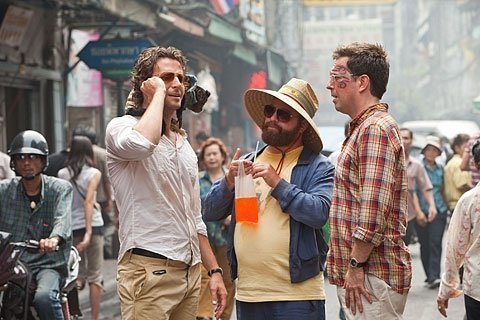 NEW YORK (CNS) — Let’s save some time here regarding "The Hangover Part II" (Warner Bros.) by recalling how we described its predecessor two years ago: "a 100-minute assault of loutish behavior, violence, racial stereotypes and male nudity strung along a thin plot."

The sequel: 102 minutes, identical plot, an overall uglier tone, considerably more Asian stereotyping in a Thailand setting, and all sexual references are to homosexual acts. Offensive as the first one was, it had a gleeful juvenile audacity this one abandons.

This "We were so stoned that …" epic, directed by Todd Phillips and written by Craig Mazin and Scot Armstrong, has Stu Price (Ed Helms) getting married to Lauren (Jamie Chung). Reuniting with Phil Wenneck (Bradley Cooper) and the pathologically immature Alan Garner (Zach Galifianakis) on a Thai beach, they gather for a quiet outing with the bride’s teenage brother, Teddy (Mason Lee).

This time, Alan has drugged up the marshmallows, sending the boys on a wild debauch they have to reconstruct the next day when they wake up from their stupor in Bangkok with Teddy missing; their sole clue: one of his fingers left behind. Again, they encounter international hoodlum Mr. Chow (Ken Jeong), who makes his entrance nude, but this time, Mr. Chow is heavily into cocaine.

No tiger in this one. Instead, there’s a monkey who performs sexual acts on men. Mike Tyson performs a musical number. This joke is so over.