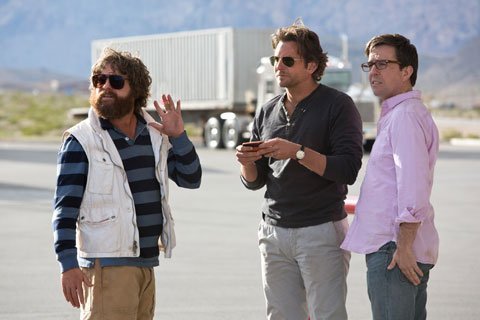 NEW YORK (CNS) — On its surface a defanged and declawed version of the first two installments, "The Hangover Part III" (Warner Bros.) has no sex, no alcohol or drug abuse and almost no nudity, albeit that last element is eventually — perhaps inevitably — included via a closing-credits sight gag.

What’s left from director Todd Phillips, who co-wrote with Craig Mazin, is what used to be called a "caper comedy" filled with car chases, a few scattershot ethnic slurs involving Asians and Jews and, unsettlingly enough, what proves to be a quite benign view of coldblooded murder.

This time, Alan Garner (Zach Galifianakis), the spoiled rich boy, finally has to mature — at age 42, it’s about time — following the death of his father, Sid (Jeffrey Tambor). Alan’s friends Phil Wenneck (Bradley Cooper) and Stu Price (Ed Helms) stage an intervention to get their unstable pal the help he needs at a mental health facility in Arizona.

En route, "The Wolfpack," as they call themselves, are waylaid by gangster Marshall (John Goodman). Marshall wants them to help retrieve $21 million in gold bars stolen by archcriminal Mr. Chow (Ken Jeong), who recently escaped from a Bangkok prison. Marshall holds Alan’s brother-in-law, Doug (Justin Bartha), hostage until the loot is returned.

There are long stretches involving bungled criminal activity and hit-and-miss non-sequitur dialogue before a final showdown in Las Vegas, a place "The Wolfpack" now dreads after the group’s drug-fueled adventure there in the first film. They reconnect with Jade (Heather Graham), who launched their initial debauch, and Alan finds love with Cassie (Melissa McCarthy), a pawnshop owner.

While the shenanigans that made the earlier entries repellent may mercifully be absent, there’s a different, deeper — and philosophically, at least, potentially more troubling — recklessness at work in this picture. In the inkiest vein of nihilistic black humor, the frequent intrusion of death — whether that of disposable animals or of equally disposable people — is presented as a cue for guffaws.

Thus, whenever the filmmakers run out of uses for a character, as they do for Black Doug (Mike Epps), they simply have him killed.