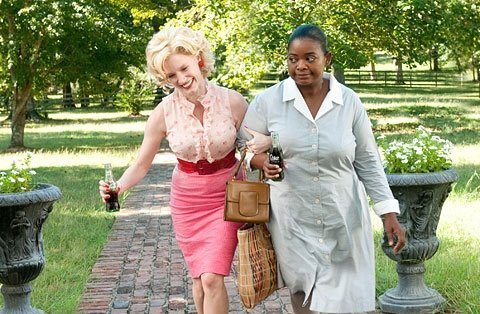 NEW YORK (CNS) — Though unlikely to be popular with the more senior members of the Junior League of Jackson, Miss., the warm, deftly acted drama "The Help" (Disney) seems destined to win hearts in many other quarters.

A harsh scatological plot development, however, marks the film as off-limits for younger viewers — who might otherwise benefit from its generally uplifting story — and will even be off-putting for many adults.

Fresh from her studies at Ole Miss, Eugenia "Skeeter" Phelan (Emma Stone) returns home to Jackson in the early 1960s with her head full of rebellious notions. Instead of finding herself a husband, as her good-hearted but traditionally minded mother, Charlotte (Allison Janney), would prefer, Skeeter wants to be a journalist.

As for the wildly racist thinking that prevails among her privileged peers — personified most viciously by Junior League leader Hilly (Bryce Dallas Howard) — Skeeter has no patience for it. Neglected by Charlotte, Skeeter was nurtured instead by her family’s black housemaid, Constantine (Cicely Tyson in a brief but wonderful performance),for whom Skeeter retains a deep affection.

Securing a job as the household hints columnist for a local paper, Skeeter turns to another servant, Aibileen (Viola Davis), for advice on the subject. But Aibileen’s help with cleaning tips soon becomes a pretext for Skeeter’s secret and potentially dangerous scheme to write a book documenting the lives of Jackson’s African-American domestics.

Though initially reluctant to cooperate, Aibileen decides to take the risk based on a sermon she hears in church. Eventually Skeeter also manages to win the confidence of Aibileen’s sassy best friend Minnie (Octavia Spencer), whose anecdotes include the off-color tale of how she took revenge on Hilly for firing her.

Since Hilly is leading a crusade to establish separate bathrooms for the city’s maids, so they won’t spread disease to the white population by using their employers’ facilities, Minnie’s manner of wreaking vengeance is apt. But, as portrayed in a fairly lengthy scene, and as repeatedly referred back to, the incident is also profoundly distasteful.

The dynamic created by Skeeter’s perkiness, Aibileen’s mournful warmth and Minnie’s irrepressible sauciness keeps the pace unflagging while the proceedings are further enriched by supporting performances from Jessica Chastain as a kooky but kindly social outcast and Sissy Spacek as Hilly’s Alzheimer’s-beset, but still spirited mom.

Dramatizing the stupidity of prejudice and the expansive possibilities open to those who overcome it, "The Help" is a richly humanistic tale mature viewers will welcome.

The film contains a graphic scatological theme, brief violence and medical gore, veiled sexual references, a half-dozen uses each of profanity and crude language and a few racial slurs. The Catholic News Service classification is A-III — adults. The Motion Picture Association of America rating is PG-13 — parents strongly cautioned. Some material may be inappropriate for children under 13.