The Hobbit: The Desolation of Smaug - Catholic Courier 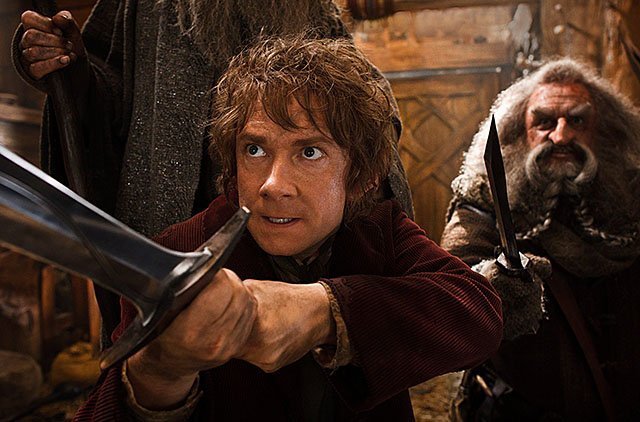 Martin Freeman stars as Bilbo and John Callen as Oin in a scene from the movie "The Hobbit: The Desolation of Smaug." The Catholic News Service classification is A-II -- adults and adolescents. The Motion Picture Association of America rating is PG-13 -- parents strongly cautioned. Some material may be inappropriate for children under 13.

NEW YORK (CNS) — It seems unlikely that Pope Francis will decide to shatter yet another papal precedent by visiting a multiplex anytime soon. Should he do so, however, he’d probably approve of the underlying themes in director Peter Jackson’s lively sequel "The Hobbit: The Desolation of Smaug" (Warner Bros.).

Just as the pontiff himself has repeatedly done, Jackson’s second installment in a trilogy of films based on Catholic author J.R.R. Tolkien’s 1937 novel warns against the corrupting influence of wealth and power.

Such Gospel-aligned messages, together with the peppier pace of this outing, compared to its 2012 predecessor, "The Hobbit: An Unexpected Journey," will likely please teens and adults. But, as with Jackson’s original journey into Tolkien’s fictional world of Middle-earth, this follow-up is too intense for the smallest viewers.

In fact, the movie could be taken as a primer in creative ways to kill Orcs. Those evil creatures are the principal adversaries the once-timid hobbit Bilbo Baggins (Martin Freeman) encounters as he courageously continues the quest entrusted to him by the good wizard, Gandalf the Grey (Ian McKellen).

Bilbo’s mission is to help a group of Dwarves recapture their ancestral stronghold, the Lonely Mountain, from the terrifying dragon Smaug (voice of Benedict Cumberbatch) who long ago displaced them from it.

The Dwarves’ doughty king in exile, Thorin Oakenshield (Richard Armitage), proves himself skilled at dispatching Orcs. So, too, do the dwarf-averse Wood-elf warrior Legolas (Orlando Bloom) and his female comrade in arms, Tauriel (Evangeline Lilly).

Though she initially shares Legolas’ hostility toward Bilbo’s vertically challenged traveling companions, Tauriel’s attitude softens considerably after she meets the best looking of their number, Kili (Aidan Turner). A bit of humorous back-and-forth between these two accounts for the only element in the film that might register as inappropriate for adolescents.

As the Orc casualties mount, and Bilbo and his band get closer to their destination, Gandalf separates from them to pursue even bigger game than Smaug. He’s out to prevent darker forces than any mere fire-breather from consolidating their power in a way that could threaten all of Middle-earth.

Along with the critique of greed implicit in the story of how Smaug came into possession of the Lonely Mountain and its vast store of gold, Bilbo’s ambiguous relationship with the magical ring he acquired in the first part of his adventure illustrates the dangers posed by a thirst for power.

Though Bilbo can use the ring for good — while wearing it, he’s rendered invisible, which frequently comes in handy — its presence exerts a beguiling but negative influence over him. Similarly, Thorin is shown to be temporarily bewitched — and morally compromised — by the horde of wealth stored in the Lonely Mountain.

The ordeal of these two fundamentally good but easily tempted characters adds weight to the drama of their journey. More straightforward, but equally congruent with Judeo-Christian values, is Gandalf’s battle with outright evil. In fact, the manifestation of this malignancy chillingly echoes Scripture when he boasts of his followers, "We are legion."

The film contains much vivid but bloodless action violence, some occult undertones and a brief instance of mildly sexual humor. The Catholic News Service classification is A-II — adults and adolescents. The Motion Picture Association of America rating is PG-13 — parents strongly cautioned. Some material may be inappropriate for children under 13.