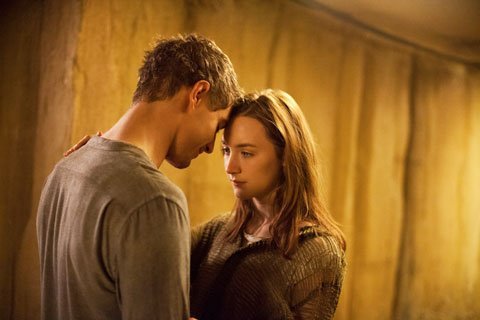 NEW YORK (CNS) — Derived from a novel by "Twilight" author Stephenie Meyer, the ponderous, dramatically inept science fiction tale "The Host" (Open Road) is clearly aimed at teen viewers. But the murky circumstances of its central love affair make it too morally obscure for most adolescents.

As for those in a more mature demographic, while they may be better equipped to discern an ethically acceptable path through it all, they may not want to bother.

This ill-conceived dystopian project rests on the premise that alien spirits have taken over the bodies of most human beings.

As the opening narrative informs us, these highly evolved hijackers, with their tranquil personalities, have managed to resolve most of humanity’s most pressing problems: war, world hunger, you name it. But, while they may be enlightened and unflappable, they also brook no opposition — just ask our youthful heroine Melanie Stryder (Saoirse Ronan).

Understandably unwilling to be transformed into an intergalactic Stepford wife, Melanie has been on the lam. But her fugitive days come to an abrupt end when she’s captured and subjected to the forced infusion of an extraterrestrial consciousness (visualized as a kind of luminous creepy-crawly surgically inserted into the back of Melanie’s neck).

Far from going quietly, however, spunky Melanie manages to retain her own soul through the process, much to the surprise of her new corporeal roommate, an entity called Wanderer. Here the fatal absurdity that undermines all that follows kicks in as Melanie and Wanderer begin an endless — frequently shrill — debate with each other via voice-over (Melanie) and dialogue (Wanderer).

The result might aptly be called "Sybil Meets the Body Snatchers."

If only this were an old-fashioned Western, Wanderer could put us all out of our misery by declaring: "This body ain’t big enough for the both of us!" Instead, the increasingly sympathetic invader allows Melanie to convince her to return to, and aid, the band of earthlings with whom Melanie sheltered while on the run.

Flashbacks reveal that, before they came under Uncle Jeb’s protection, Melanie and Jared were living together as a couple and doing their best to rear Melanie’s kid brother, Jamie (Chandler Canterbury). The duo’s relationship became physical, we learn, at Melanie’s explicit invitation.

The extreme situation — talk about a clergy shortage! — may excuse this improvised marriage between two characters clearly destined to make their way into the sunset together. But, even so, immature moviegoers might easily be led astray by such a do-it-yourself approach to bonded bliss.

The film contains much action violence, fleeting gore, a suicide theme, cohabitation with brief semi-graphic sexual activity and a couple of crass terms. The Catholic News Service classification is A-III — adults. The Motion Picture Association of America rating is PG-13 — parents strongly cautioned. Some material may be inappropriate for children under 13.