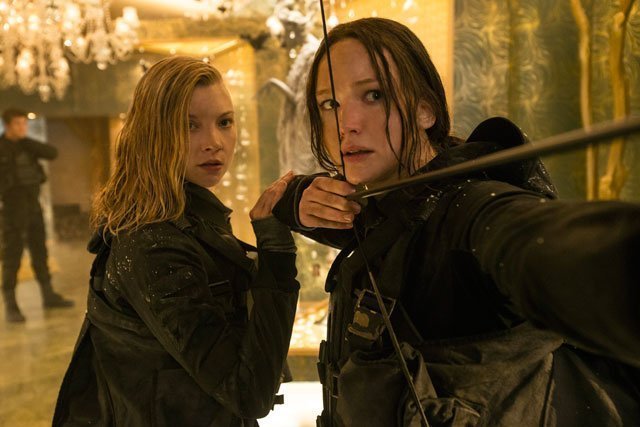 Natalie Dormer and Jennifer Lawrence star in a scene from the movie "The Hunger Games: Mockingjay, Part 2." The Catholic News Service classification, A-II -- adults and adolescents. Motion Picture Association of America rating, PG-13 -- parents strongly cautioned. Some material may be inappropriate for children under 13.
By John Mulderig
Catholic News Service
NEW YORK (CNS) — With "The Hunger Games: Mockingjay, Part 2" (Lionsgate), one of the most successful cinema franchises of recent times reaches a surprisingly glum finale.
Given that the series is founded on the idea of a dystopian society where young people are sacrificed in the gladiatorial tourneys of the title, perhaps the sober tone of this fourth and final chapter in the screen saga is only appropriate. All the more so, since the later stages of the narrative chronicle the bloody effort required to challenge the regime that sponsors these barbaric contests.
Still, while a restrained mood may be fitting, there’s no denying that the film’s grimly realistic, though largely bloodless, portrayal of combat makes the last stretches of its heroine’s long odyssey something of a slog. The wide audience for whom this briefly horror-tinged sci-fi outing is suitable will take their leave of Katniss Everdeen (Jennifer Lawrence), accordingly, in a worn-down and meditative frame of mind, rather than with any exuberance.
At once a victor in and subverter of the Hunger Games, former media darling Katniss has become the symbol of the revolution being led by rebel
President Alma Coin (Julianne Moore) and establishment turncoat Plutarch Heavensbee (Philip Seymour Hoffman). Although this duo wants to use her for strictly symbolic purposes, stubborn Katniss has an agenda of her own.
Without consulting anyone in authority, Katniss has committed herself to the task of assassinating President Coriolanus Snow (Donald Sutherland), the tyrannical chief of the old order. Along the way to fulfilling this mission, however, she’s distracted by romantic complications left over from the earlier passages of her story.
Fellow Hunger Games veteran Peeta Mellark (Josh Hutcherson) has had his love for Katniss infected with hatred against her as a result of being captured, tortured and brainwashed by the enemy. Emotionally broken, he veers between trying to kill his former sweetheart and continuing to carry a torch for her.
Katniss’ childhood friend-turned-steadfast-comrade, Gale Hawthorne (Liam Hemsworth), whose affections have made him Peeta’s long-standing rival, is equally, if less painfully torn. He’d like to take advantage of Peeta’s vulnerability, but finds Katniss too troubled by Peeta’s pathetic fate to give him her wholehearted love.
As director Francis Lawrence wraps up the blockbuster adaptations of novelist Suzanne Collins’ trilogy, his film avoids painting armed conflict with too bright a palette. And the obscenity-free script, penned by Peter Craig and Danny Strong, honorably explores the morality of war and the justice of targeting oppressors.
The dialogue makes incidental references to the suicide pills which are routinely distributed to insurgent soldiers so that, if taken prisoner, they can avoid torments similar to — or perhaps even worse than — those doled out to Peeta. Parents of teen viewers may want to discuss the fact that Catholic teaching forbids resort to such measures, no matter how fearful the ordeal a captive may potentially face.
Additionally, those determined to find moral fault may bristle at a late scene in which Katniss joins a male character in bed. Although their interaction, as shown, amounts to no more than cuddling, current mores leave what follows off-screen subject to a suspicious interpretation.
Given the ethical tenor of its predecessors, however, "Mockingjay, Part 2" is entitled to the benefit of the doubt on this score. So youthful moviegoers for whom Katniss is catnip will, in all likelihood, not be led astray.
The film contains much stylized and some harsh violence but with minimal gore, mature themes including war atrocities and suicide, potentially frightening scenes, and an apparently innocent but possibly ambiguous bedroom encounter. The Catholic News Service classification is A-II — adults and adolescents. The Motion Picture Association of America rating is PG-13 — parents strongly cautioned. Some material may be inappropriate for children under 13.
– – –
Mulderig is on the staff of Catholic News Service.
Copyright © 2023 Catholic News Service, Inc. All rights reserved. Linking is encouraged, but republishing or redistributing, including by framing or similar means, without the publisher's prior written permission is prohibited.