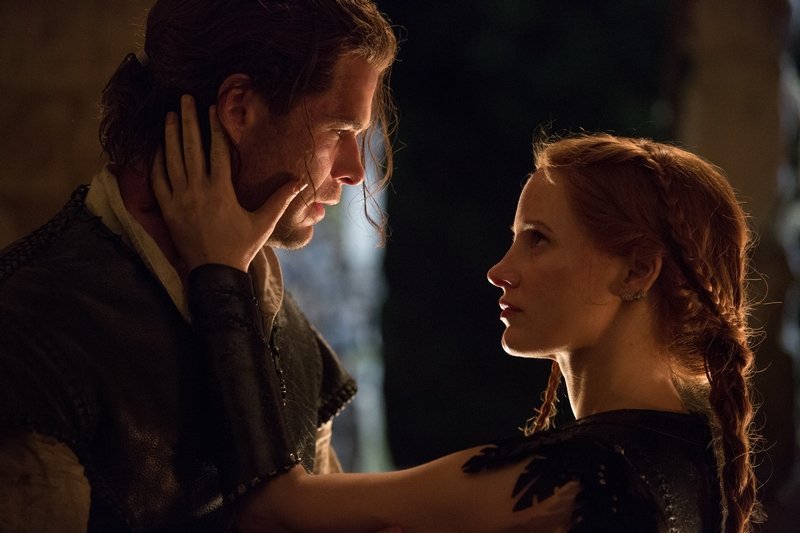 Chris Hemsworth and Jessica Chastain star in a scene from the movie "The Huntsman: Winter's War." The Catholic News Service classification is A-III -- adults. The Motion Picture Association of America rating is PG-13 -- parents strongly cautioned. Some material may be inappropriate for children under 13.

NEW YORK (CNS) — "The Huntsman: Winter’s War" (Universal) is both a prequel and a sequel. As such, it falls between two stools — with a resounding thud.

Positioned to bookend the action of 2012’s "Snow White and the Huntsman," this lavishly staged adventure is well intentioned but dull. It boils down to a derivative mash-up of fantasy films like "The Lord of the Rings" trilogy and Disney’s smash hit "Frozen."

Everything from the first movie has been doubled-up by director Cedric Nicolas-Troyan and screenwriters Evan Spiliotopoulos and Craig Mazin. In addition to two time frames, there are now a duo of wicked queens, a pair of rival kingdoms and a brace of brave huntsmen.

Noticeably absent, as the title suggests, is Snow White herself. Perhaps she was done in by a happy ending: At the conclusion of the last installment — in which she was portrayed by Kristen Stewart — she had vanquished her queenly, and thoroughly evil, adversary (Charlize Theron) and been installed as the benevolent ruler of a peaceable kingdom.

No matter, Thor is here — or at least his human embodiment, Chris Hemsworth, is. Hemsworth reprises his role as Eric, the fearless (and, need it be said, hunky) huntsman.

Eric is given a backstory in the prequel part of the film. Kidnapped as a boy, he is raised by Freya (Emily Blunt), the Ice Queen — think Elsa in "Frozen," but not as sweet — to be the ultimate soldier. His rearing is part of Freya’s drive to conquer neighboring kingdoms.

Freya, we learn, was not always so mean. In fact, her bad-to-the-bone sister, Queen Ravenna (Theron), puts her in the shade wickedness-wise. As veterans of the first outing will know, Ravenna is the malevolent ruler who will one day face off against Snow White.

A dalliance between Freya and a nobleman, the Duke of Blackwood (Colin Morgan), produces a child. This provokes the usual warnings from that familiar magic mirror about Ravenna’s endangered status as "the fairest of them all." Wild with jealously, Ravenna has the infant girl killed before Freya can run off with her lover.

Freya’s reaction is unexpected: her profound grief releases a dormant power to control ice and snow. She abandons Ravenna to run her own show and raise an army.

"In my kingdom there is but one law — do not love," Freya tells her subjects. "It is a sin and I will not have it."

But romance will not be denied, and soon Eric has pledged his troth and secretly married fellow huntsman (huntswoman?) Sara (Jessica Chastain). When they try to escape, Freya separates the spouses, and Eric is banished.

At this point, "The Huntsman: Winter’s War" fast-forwards seven years, jumping over the events of the original. As round two kicks off, all the world seems at peace — at least until Prince William (Sam Claflin) tracks Eric down in the forest.

William has a quest for Eric. To wit, to find that loquacious looking glass — which has disappeared — and destroy it. Eric is joined on this mission by a quartet of dwarf sidekicks, Nion (Nick Frost), Gryff (Rob Brydon), Mrs. Bromwyn (Sheridan Smith) and Doreena (Alexandra Roach) — all of whom provide welcome comic relief.

By now, silliness and tedium rule, and any connection to the Brothers Grimm and their 200-year-old fairy tale has been lost. Suffice it to say that, by the time the filmmakers resort to introducing flying monkeys into the mix, you’ll wish you were back home in Kansas with good old Auntie Em.

The film contains cartoonish action violence, implied premarital sexual activity, an out-of-wedlock pregnancy and a few crass terms. The Catholic News Service classification is A-III — adults. The Motion Picture Association of America rating is PG-13 — parents strongly cautioned. Some material may be inappropriate for children under 13.