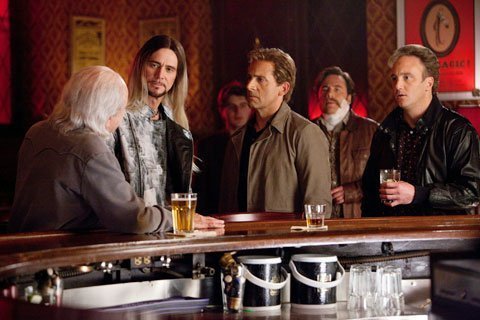 On the surface, the film, directed by television veteran Don Scardino ("30 Rock"), seeks its laughs the conventional Hollywood way, via sexual innuendo or gross-out sight gags. Regrettably, such sleaze — together with a morally flawed conclusion — obscures interesting commentaries on the wickedness of narcissism and a fallen idol’s potential path to redemption.

For years, the hottest ticket in Sin City has been "A Magical Friendship," headlined by the superstar — and colorfully named — magicians Burt Wonderstone (Steve Carell) and Anton Marvelton (Steve Buscemi). The two have been pals since elementary school, when a shared love for sleight-of-hand built confidence and provided armor against bullies.

"Everyone loves a magician," intoned the great illusionist Rance Holloway (Alan Arkin) in his how-to videotape watched by the wide-eyed boys. "And they will all love you, too."

Audiences did, but lately changing tastes and increased competition have dimmed the spotlight and strained the friendship. Burt, channeling Siegfried and Roy with his flowing blond locks, spray tan and sequined jumpsuit, has become an obnoxious diva who beds lady volunteers from the audience. He’s bored with the act and, especially, with Anton, who has never wavered in his self-discipline and loyalty.

When a new stunt fails in spectacular fashion, the duo parts ways, and Burt falls on hard times, forced to work as an entertainer in an old folks’ home.

Meanwhile, a new star is rising in the person of outrageous street performer Steve Gray (Jim Carrey), who goes by the title "The Brain Rapist." Steve’s form of magic involves squeamish physical challenges, such as using his head to pound nails into wood or holding his urine for days on end.

To Steve, magicians such as Burt and Anton are old school and must be destroyed. "It’s natural for a dying leaf to be frightened of this autumn wind," he tells Burt.

To make matters worse, Burt and Anton’s former assistant, the lovely Jane (Olivia Wilde), has become Steve’s aide. But Jane, a magician herself, has a soft spot for the down-and-out Burt, and supports efforts to turn his life around.

"The Incredible Burt Wonderstone" takes a decisive wrong turn at its climax — when a big comeback stunt depends more on narcotics than on magic. Coming on top of all the dubious humor on display, this development ramps up the problematic content of the picture — and will leave viewers questioning whether Burt’s values have really changed after all.

The film contains a benign view of drug use and contraception, much crude humor, sexual innuendo and occasional profane and rough language. The Catholic News Service classification is L — limited adult audience, films whose problematic content many adults would find troubling. The Motion Picture Association of America rating is PG-13 — parents strongly cautioned. Some material may be inappropriate for children under 13.