The incredible faith and strength of the maid of Orleans - St. Joan of Arc - Catholic Courier 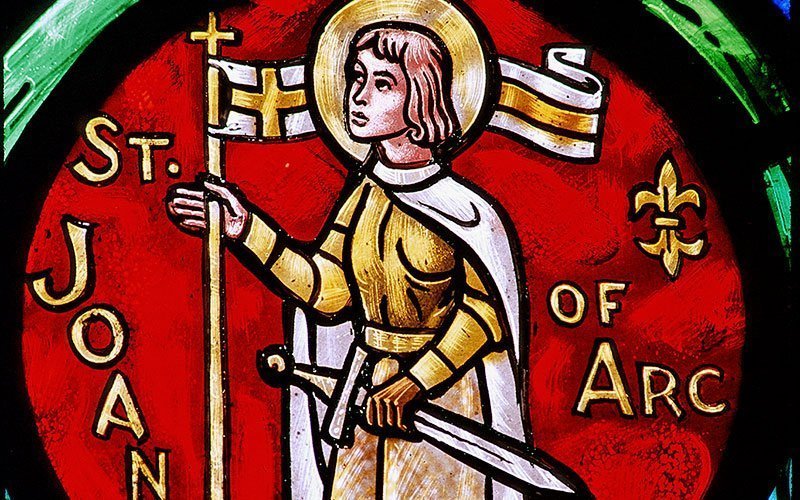 The likeness of St. Joan of Arc is seen at St. Paul Episcopal Cathedral in Springfield, Ill. (CNS photo by Gene Plaisted, The Crosiers)

Was she suffering from schizophrenia or a form of epilepsy, as some modern writers have suggested? How did a teenage girl persuade the future King Charles VII of France to let her lead his troops into battle? And how could those to whom she was so loyal leave her so defenseless in the end?

St. Joan of Arc, whose feast day is May 30, inspired the French in battle against the English in the 15th century and was subsequently executed as a heretic.

Hundreds of years later, she inspires more questions than nearly any saint in history. Books about her fill shelves, and perhaps more films tell her story than that of any other saint. She continues to fascinate and captivate the popular imagination.

Who was this woman who was burned at the stake before her 20th birthday?

Joan was born in 1412 into the midst of the Hundred Years’ War, a conflict that actually lasted 116 years, from 1337 to 1453. This “war” was not one constant, ongoing battle, but rather an intermittent series of fights, punctuated by years of peace and bouts of plague, over who had the right to rule France.

The dispute involved a long series of claimants, both English and French, to France’s throne. This being the medieval period, there was much intermarriage between royal families making a clear-cut winner a tough pick. Some French, called the Burgundians, supported the English claim.

This was a fight between two Catholic countries. It wouldn’t be until the 16th century that King Henry VIII severed England’s ties to Rome.

Joan was born to a devout peasant family in Domremy, France. She was illiterate and spent her childhood learning domestic duties and helping on the farm. It is said that even within her own local area, people disagreed about whom should rule France.

When Joan was around 12 or 13 years old, she began to have visions. She said her messengers were St. Michael the Archangel, St. Catherine of Alexandria and St. Margaret of Antioch, and their assignment became clear: She was to help Charles VII be officially proclaimed the rightful king of France.

As a little girl, she did not immediately act on these messages. How could she? But she continued to see visions and hear voices and by the time she was 16, she approached a local garrison commander and told him she wanted to meet the king.

Naturally, he scoffed. But Joan must have been incredibly charismatic. And this being medieval France, her claim of visions appealed to the popular imagination. The locals began to support her, and Joan eventually parlayed this ability to rally opinion into martial victory.

But first she needed to sway the commander, who relented and sent her with an escort on the 300-mile journey, some of it through wilderness, to the king’s court.

What happened there is a mystery. Tradition says Joan was able to recognize Charles VII, even though he disguised himself to test her. Supposedly, she told him things only he would know.

Convinced, he allowed her, dressed for battle as a man, to lead his troops into the crucial fight for Orleans. Fervent hope spread that the young visionary was God’s instrument of French victory.

Although Joan was wounded during the battle, the liberation of Orleans and subsequent victories led to the formal crowning of Charles at Rheims, which had also been foretold in her visions. Her renown spread; she was perhaps the most famous person in Europe.

Unfortunately for Joan, military victory was short-lived. About a year after the victory at Orleans launched her epic successes, she was captured by the Burgundians. Her subsequent imprisonment casts a negative light on Charles VII, who did almost nothing to secure her release. Had he believed she was God’s messenger, or was she a convenient prop whose time had passed?

The English put her on trial, an ecclesial trial run by the church. But that did not take politics out of the equation, since she was in English custody and the questions surrounding her case and her enormous notoriety were political.

Transcripts of her trial exist, and they portray a courageous woman who maintained confidence in her visions. The trial itself highlights the animus against a strong female.

Joan was charged with heresy, witchcraft and dressing like a man. Yes, that last charge alleged that Joan’s cross-dressing violated divine law, even though she needed the protection of armor in battle and protested that she feared assault in prison without male garb.

Eventually found guilty, Joan was burned before a crowd of thousands. Her ashes were scattered in the Seine River.

The Hundred Years’ War would drag on, but Joan’s martyrdom helped spur the French to eventually drive the English out of most of France. Charles VII, perhaps feeling some well-deserved guilt, procured a trial review years later that nullified Joan’s guilty verdict.

It would be nearly 500 years later, in 1920, that the 19-year-old visionary and warrior was canonized, increasing her historical profile and offering an example of strength against impossible odds for women everywhere.