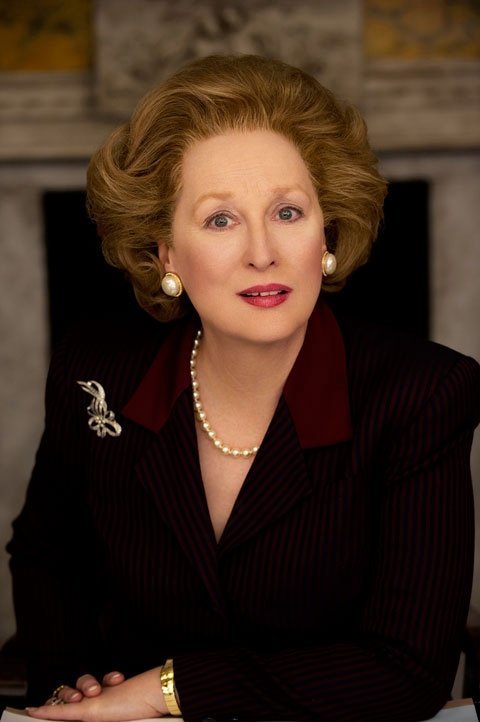 NEW YORK (CNS) — The British market a brand of yeast spread called Marmite. Due to its overwhelmingly strong taste, its label carries the slogan "Love it or Hate it."
As a result of the visceral reactions, both pro and con, stirred by her controversial 1979-1990 tenure in office, former U.K. leader Margaret Thatcher — now Baroness Thatcher — has been described as the Marmite of prime ministers.

With critics describing her as nothing less than evil, and supporters naming her the greatest prime minister ever, it seems unlikely, in theory at least, that a fair portrayal of Thatcher’s life on screen would even be possible. Yet, with the touching biopic, "The Iron Lady" (Weinstein), director Phylidda Lloyd has overcome the odds to achieve exactly that.

The film shuttles between the present day — with the elderly Thatcher (Meryl Streep) suffering from a combination of dementia and short-term memory loss — and a series of flashbacks recounting significant passages in the handbag-wielding ex-leader’s life. The latter take in her humble beginnings as a provincial greengrocer’s daughter, her romance with future husband Denis (Jim Broadbent) and her eventual expulsion from office at the hands of scheming opponents within her own Conservative Party. They’re led by the stealthy Michael Heseltine (Richard E. Grant).

Along the way, Thatcher survives an assassination attempt, reclaims the Falkland Islands, and becomes the longest serving British premier of the 20th century. Events are portrayed in an evenhanded, nonpartisan manner, though some incidents are sensationalized for cinematic effect.

For example, there’s the treatment of the tragic death of one of Thatcher’s close colleagues, a member of Parliament killed by an Irish Republican Army car bomb. While this murder really took place, the script inaccurately puts Thatcher at the scene, hearing the explosion and desperately running toward the wreckage until restrained by a passer-by.

Additionally, the moving relationship between husband and wife — Denis Thatcher died in 2003, but is shown to be an enduring presence in his widow’s damaged consciousness — sends an unmistakably pro-family message. This marks a refreshing change from the increasingly common presentation of longtime married couples as bored and unfulfilled.

The emotions of the audience will be heightened also by the glorious performance of Streep, whose ability to step into the metaphorical shoes of the former Miss Roberts is so accurate that it borders on the frightening; it will be no surprise to cinema viewers that her performance has earned her an Academy Award nomination.

Moviegoers concerned that Thatcher’s forceful response to the Argentine junta’s 1982 invasion of the Falklands might be used as an occasion to glorify combat need not worry. Although her decision to retaliate is represented as justified, the miseries and human cost of war are not by any means overlooked. Thus we see Thatcher tearfully undertaking the task of writing to the mothers of the fallen.

While prone to moments of overemotional fluff, the movie nonetheless offers both an intimate portrait and an educational dramatization. A greater emphasis on Thatcher’s firm Methodist faith would have been a pleasant addition. But the result is still one that audiences of any political persuasion can relish.

The film contains two scenes of terrorist attacks, documentary footage of real-life violence, a glimpse of upper female nudity and a few instances of crass British slang. The Catholic News Service classification is A-III — adults. The Motion Picture Association of America rating is PG-13 — parents strongly cautioned. Some material may be inappropriate for children under 13.