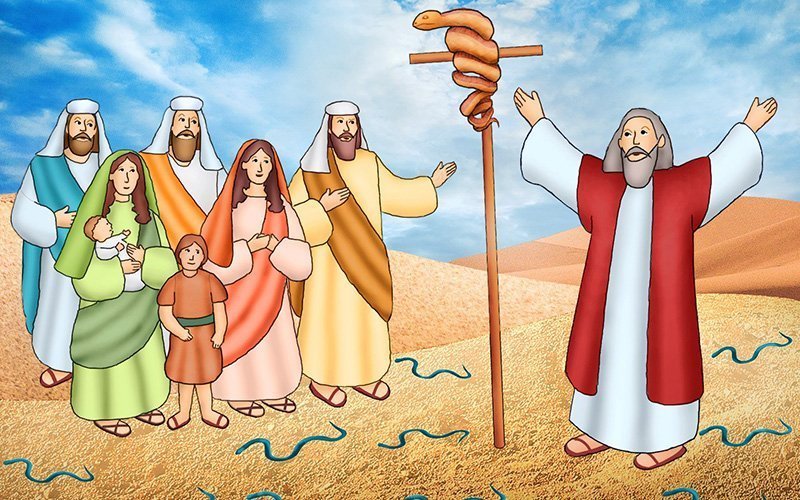 This is the artwork for Kids' Chronicle for Sept. 14, 2020. (Illustration by Linda Rivers)

The Israelites complain against God

The Israelites complain against God

With the help of God, Moses had freed the Israelites from slavery in Egypt and led them toward the land that God had promised to give to them.

The journey from Egypt to the Promised Land took 40 years, because the people kept sinning against God.

“Please let us pass through your land,” Moses said. “We will not cross any fields or vineyards, nor drink any well water, but we will go straight along the King√¢‚Ç¨‚Ñ¢s Highway without turning to the right or to the left, until we have passed through your territory.”

“You shall not pass through here; if you do, I will advance against you with the sword,” the king replied.

The Israelites traveled to Mount Hor on the border of Edom. Instead of going through Edom, they went around it by way of the Red Sea.

The people were impatient and worn out by the journey, and they began to complain against God and Moses.

“Why have you brought us up from Egypt to die in this wilderness, where there is no food or water?” they complained to Moses. “We are disgusted with this wretched food!”

God was not happy that the people were once again sinning against him by complaining.

So he sent seraph serpents into the Israelites’ camp. The serpents bit the people, and many of those who were bitten died.

The Israelites then saw the error of their ways.

“We have sinned in complaining against the Lord and you,” the people said to Moses. “Pray to the Lord to take the serpents from us.”

Moses did as the people had asked, and God listened to Moses√¢‚Ç¨‚Ñ¢ prayer.

“Make a seraph and mount it on a pole, and everyone who has been bitten will look at it and recover,” God told Moses.

ESSAY: When have you received consequences for your negative actions, and how did you show repentance?

What did the Israelites eat during their journey to the Promised Land?

In Exodus 16, we read that the people grumbled about food.

“If only we had died at the Lord’s hand in the land of Egypt, as we sat by our kettles of meat and ate our fill of bread! But you have led us into this wilderness to make this whole assembly die of famine!” the people complained.

God heard what the Israelites were saying.

“Tell them: In the evening twilight you will eat meat, and in the morning you will have your fill of bread, and then you will know that I, the Lord, am your God,” he told Moses.

Just as God had promised, in the evening, quail came into the Israelites’ camp so they had meat to eat. In the morning, a dew covered the camp. When it evaporated, fine flakes — known as manna — were left behind so the Israelites could make bread.

The people ate manna for 40 years, until they came to the Promised Land.

Francesco Forgione was born in the Italian farming village of Pietrelcina in 1887.

He took the name Pio upon entering the Capuchin order, and he became commonly known as Padre Pio after his priestly ordination in 1910.

After his ordination, he bore the stigmata, or the wounds of Christ√¢‚Ç¨‚Ñ¢s crucifixion. The wounds were invisible at first but became visible in 1918.

St. Pio became well-known as a confessor and for his ministry of prayer and healing. He built a hospital in San Giovanni Rotondo to heal people using prayer and science, and he also built a pilgrimage and study complex.

Shortly before his death in 1968, his stigmata disappeared. He was canonized in 2002, and we remember him on Sept. 23.