The Israelites start to worship a golden calf - Catholic Courier 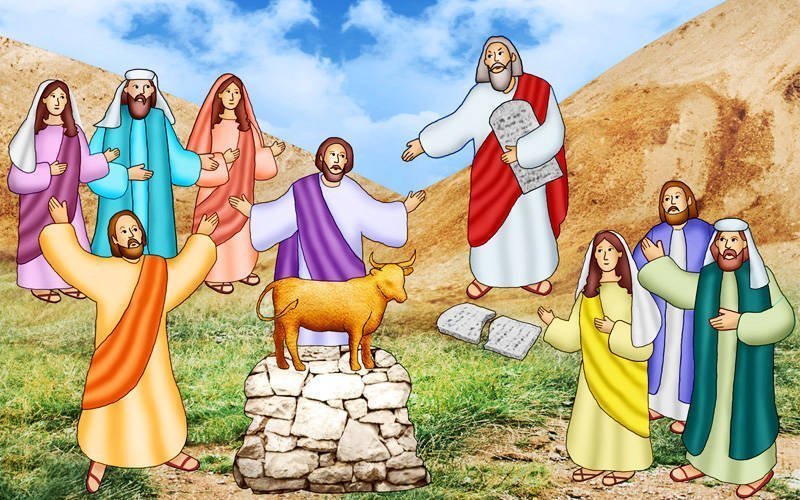 The Israelites start to worship a golden calf

The Israelites start to worship a golden calf

During the Israelites’ time in the desert, God summoned Moses to come up Mount Sinai.

“While you are there, I will give you the stone tablets on which I have written the commandments intended for their instruction,” God said, referring to the Israelites.

Moses went up the mountain for 40 days and 40 nights. When Moses was delayed in returning, the Israelites gathered around his brother, Aaron.

“Come, make us a god who will go before us; as for that man Moses who brought us out of the land of Egypt, we do not know what has happened to him,” they said.

Aaron asked the people for gold jewelry, and he fashioned the gold into a molten calf.

“These are your gods, Israel, who brought you up from the land of Egypt,” the people cried out.

Aaron built an altar in front of the calf and declared a feast of the Lord the following day.

The next day, the Israelites sacrificed burnt offerings and brought communion sacrifices. Then they sat down to eat and drink, and they rose up to revel.

God saw all that was going on in the Israelite’s camp.

“Go down at once because your people, whom you brought out of the land of Egypt, have acted corruptly,” he told Moses.

Moses came down the mountain with the two tablets of the covenant in his hands. As he drew near the camp, he saw the calf and the dancing. Moses was so angry that he threw the tablets down and broke them on the base of the mountain.

“What did this people ever do to you that you should lead them into so grave a sin?” Moses asked Aaron, who explained what had happened.

The next day, Moses returned to God.

“Ah, this people has indeed committed a grave sin in making a god of gold for themselves! If you would only forgive their sin! If you will not, then strike me out of the book that you have written,” Moses said.

“Him only who has sinned against me will I strike out of my book,” God answered.

God said that when it came time for him to punish, he would punish those who had sinned.

1. What did God say he’d give Moses on Mount Sinai?

2. What did the people do when Moses was gone?

TRIVIA: What did Moses do when his facial skin became radiant after seeing God? (Hint: Exodus 34:35)

Answer: Covered his face with a veil.

In Exodus 34, we read about how God restored the stone tablets Moses had broken on the base of Mount Sinai.

“Cut two stone tablets like the former, that I may write on them the words which were on the former tablets that you broke,” God told Moses. “Get ready for tomorrow morning, when you are to go up Mount Sinai and there present yourself to me on the top of the mountain.”

Moses again spent 40 days and 40 nights on the mountain with God.

“Here is the covenant I will make,” God told Moses. “Before all your people I will perform marvels never before done in any nation anywhere on earth, so that all the people among whom you live may see the work of the Lord. Awe-inspiring are the deeds I will perform with you!”

God told Moses to write down the words he was saying.

“For in accordance with these words I have made a covenant with you and with Israel,” God said.

When Moses came down the mountain with the new set of stone tablets, the people were afraid to come near him at first, because the skin of his face had become radiant after being in God’s presence.

Later, all the Israelites came up to Moses, and he told them all that God had told him on Mount Sinai.

St. Lydia lived in the first century. Her name is taken from her place of origin, the city of Thyatira in the province of Lydia, which is now Turkey.

Lydia met St. Paul when he was evangelizing in Philippi. In Acts 16:13-15, she is called “a dealer in purple cloth” and “a worshipper of God.”

God opened her heart as Paul was speaking, and she became his first convert to Christianity in Philippi. After listening to Paul, she and her entire household were baptized.

We remember Lydia on Aug. 3.

Using the hints provided, put a T next to the sentences about Moses that are true and an F next to the ones that are false. If a sentence is false, write the correct answer at the end of it.