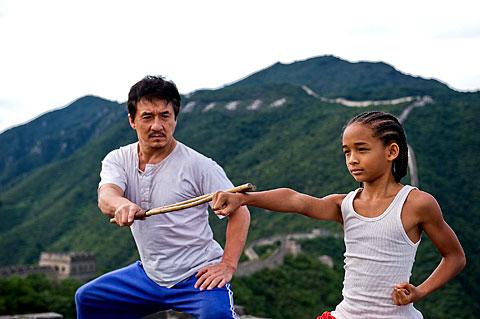 NEW YORK (CNS) — Rationales behind screen remakes are often suspect. The ambitious desire to modernize a classic has led to many a debacle, as has the aim of cashing in on a past financial success. Fortunately, misgivings about this update of 1984’s popular "The Karate Kid" dissipate once it begins to unreel.

No doubt, the producers of 2010’s "The Karate Kid" (Columbia) aren’t standing on the shoulders of an artistic giant, and commercial considerations are never far from their minds (hence the hiring of teen sensation Justin Bieber to croon on the soundtrack). Yet the movie stirs and satisfies, exhibiting sufficient fealty to the original while improving on its production values.

Setting it in Beijing makes sense, as does casting Jaden Smith in the title role and international action star Jackie Chan as his unassuming mentor. Switching from karate, with its Japanese provenance, to kung fu is not an issue. Other embellishments on the timeless underdog story are likewise organic and positive. The major flaw is a grandiose musical score, which telegraphs plot points and nearly overwhelms the film, thus accentuating its relatively long running time.

The new "Karate Kid" is also designed to showcase modern China, a function it fulfills by highlighting the architectural feats connected with the 2008 Olympics and through visits to the Forbidden City, a scenic mountain sanctuary, and the Great Wall.

Mostly because of chop-socky violence, it may be inappropriate for young moviegoers. But guardians should feel free to use their judgment about individual sensitivities, being aware that kids’ attention may wander given the movie’s length. Generic references to Eastern spirituality and the use of an ancient Chinese healing art are no cause for concern.

Like the original, helmed by John G. Avildsen ("Rocky"), this entertaining melodrama teaches valuable lessons regarding body and spirit. Director Harald Zwart stages the action sequences and quieter moments with sufficient adroitness. Whereas Pat Morita dominated the first version (receiving an Oscar nomination for his efforts), here Smith — son of Will and Jada Pinkett Smith — shines brightest thanks to his own charisma and Chan’s restrained, caricature-free performance.

Undersized 12-year-old Dre Parker (Smith) moves from Detroit to Beijing with his mother, Sherry (Taraji P. Henson), who has been transferred there for work. On day one, Dre meets classmate Meiying (Wenwen Han), a classical violinist prepping for her upcoming audition for the conservatory. Their innocent interaction draws the ire of class bully Cheng (Zhenwei Wang) and his cohorts. Later that week, Dre provokes Cheng and sustains a beating after a lengthy chase. Major injury is avoided when Mr. Han (Chan), the quiet maintenance man at the Parkers’ apartment complex, intervenes.

This incident leads to a challenge by Cheng’s belligerent kung fu teacher Master Li (Rongguang Yu) — his studio’s motto is "No weakness. No pain. No mercy." Dre enters a tournament where he will face his tormentor Cheng in the ring. Han agrees to train him, vowing to impart "real kung fu" and the healthy approach to life it entails.

Suspense is sacrificed in favor of a rousing, heartwarming tutorial concerning respect, politeness, courage, and honor. Revenge is never Dre’s motivation, but rather confronting and overcoming his fear. Along with his physical preparation, hurdles involving cultural assimilation and racial differences are easily cleared. Focus is on the friendship between Dre and Han and the mutual affection between Dre and Meiying.

The film contains hard-hitting and occasionally cruel but not graphic martial arts violence, including a boy being struck across the face by an adult, the use of a crass term for the human posterior, some mild toilet humor, one instance of sexual innuendo, and an unnecessary kiss between pre-teens. The Catholic News Service classification is A-II — adults and adolescents. The Motion Picture Association of America rating is PG — parental guidance suggested. Some material may not be suitable for children.