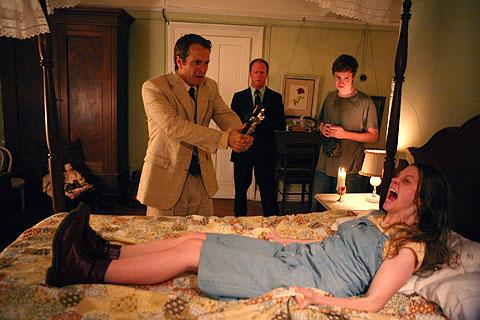 NEW YORK (CNS) — "There are more things in heaven and earth, Horatio, than are dreamt of in your philosophy." So says the haunted Prince of Denmark in the first act of Shakespeare’s "Hamlet," and so the main character discovers in the middling fright fest "The Last Exorcism" (Lionsgate).

While the gore factor is kept comparatively low in director Daniel Stamm’s Gothic outing, an ambiguous approach to faith and a dark occult atmosphere make this feature inappropriate for all but well-grounded and judicious adult viewers.

Preparing to perform the titular rite, as the film opens, is Baton Rouge-based evangelical minister and self-confessed charlatan Cotton Marcus (Patrick Fabian). Alarmed by news reports of a boy who was injured during an exorcism, Cotton has decided to abandon the practice, which he regards as nothing more than an opportunity to fleece over-credulous believers.

To publicize the trickery behind his supposed confrontations with Satan, Cotton has invited documentary filmmaker Iris Reisen (Iris Bahr) and her cameraman to tag along for his swan song as he responds to the anguished summons of fervent farmer Louis Sweetzer (Louis Herthum). The farmer fears that his 16-year-old daughter, Nell (Ashley Bell), is possessed.

Armed with elaborate special-effects gadgetry, including a crucifix that gives off smoke at the press of a button, Cotton arrives at the predictably spooky Sweetzer homestead and goes through the motions of liberating Nell’s soul. But he gets more than he bargained for when the girl begins to show signs that she is indeed in the grip of something, or someone, supernatural.

Though shaky on the details — as an evangelical, for instance, Cotton would be far more likely to make use of a plain cross than a crucifix in his staged efforts to send the devil packing — the script by Huck Botko and Andrew Gurland does toy cleverly with the modern presumption that all phenomena can be explained scientifically.

But the corrosive cynicism Cotton displays in the buildup to his encounter with Nell, which includes scornful references to an "exorcism academy" sponsored by the Vatican, will not sit well with Catholic audiences. And the diabolical doings of the movie’s climax are not for the impressionable.

The film contains a complex treatment of religion, sacrilegious activity, some gruesome images, at least two uses of profanity, brief sexual talk and references to incest and homosexuality. The Catholic News Service classification is L — limited adult audience, films whose problematic content many adults would find troubling. The Motion Picture Association of America rating is PG-13 — parents strongly cautioned. Some material may be inappropriate for children under 13.