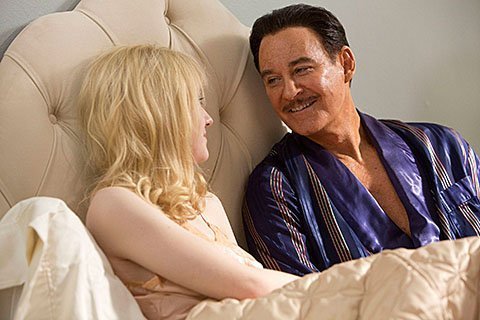 Dakota Fanning and Kevin Kline star in a scene from the movie "The Last of Robin Hood." The Catholic News Service classification is L -- limited adult audience, films whose problematic content many adults would find troubling. The Motion Picture Association of America rating is R -- restricted. Under 17 requires accompanying parent or adult guardian.

NEW YORK (CNS) — It’s no wonder Errol Flynn called his autobiography "My Wicked, Wicked Ways." The swashbuckling actor’s bad habits are showcased in "The Last of Robin Hood" (Samuel Goldwyn), a lurid account of the decline and fall of a once-beloved matinee idol.

Flynn, famous for leading roles in "Captain Blood" (1935), "The Adventures of Robin Hood" (1938), and "The Private Lives of Elizabeth and Essex" (1939), was also notorious behind the scenes as a womanizer and an alcoholic.

In "The Last of Robin Hood," writer-directors Richard Glatzer and Wash Westmoreland focus on the actor’s final two years before his death in 1959 at age 50.

It’s a sad but true story of rampant hedonism, sufficient to put anyone off considering a career in Hollywood.

We meet Flynn (portrayed with panache by Kevin Kline) in 1957. Professionally, he’s washed up, with choice film roles going to younger actors. But physically, he’s still dashing and debonair, constantly prowling the movie studios for nubile young starlets to seduce.

He lands one in Beverly Aadland (Dakota Fanning), a chorus girl on a Warner Brothers film. Beverly dreams of stardom, groomed from childhood by her pushy mother Florence (Susan Sarandon).

"Don’t fade into the woodwork," she advises her daughter, whom she provides with a faked birth certificate that says she’s 18 years old.

In reality, Beverly is 15. This doesn’t matter in the least to Flynn, who has been accused of statutory rape before (and was acquitted). Bewitched but not bothered or bewildered, Flynn and Beverly embark on a very public affair.

"I am the devil incarnate," Flynn crows. "I live every day and night as if it were my last."

Florence, initially appalled, is won over by Flynn’s charms and the potential for Beverly’s showbiz "career." She dumps her morally aghast husband Herb (Patrick St. Esprit) and follows the lovebirds to New York City.

After an interlude in Cuba with Fidel Castro (don’t ask) and a trip to Canada, Flynn pops the question, and a wedding is planned. Fate intervenes, and a happy ending is not in store.

"The Last of Robin Hood" is a cautionary tale about narcissism and the perils of fame. Viewers would do better to suspend reality and instead enjoy one of Flynn’s classic film performances from Hollywood’s golden age.