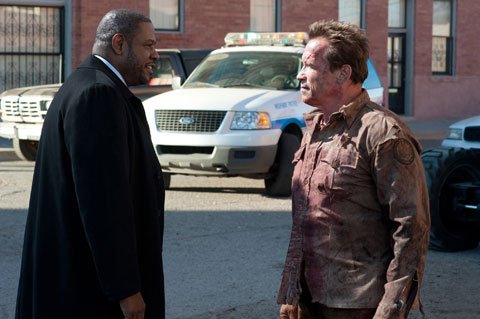 Key to the plot, Cortez also is a skilled race-car driver and his Corvette can hit speeds of nearly 200 mph.

He’s planning to cross the border at a narrow canyon near Sommerton, Ariz. Out to stop him is the town’s sheriff, ex-Los Angeles police officer Ray Owens (Schwarzenegger). Sommerton’s a sleepy place and Owens’ deputies are clownish until faced with this unprecedented challenge.

Cortez has a hostage in tow, FBI agent Ellen Richards (Genesis Rodriguez), while Owens has his deputies and an ally in local loon Lewis Dinkum (Johnny Knoxville).

The big finale includes a car chase through a cornfield and considerable gunfire aimed at an empty school bus. Schwarzenegger doesn’t chase the bad guys; they come to him. Convenient that, given his age.

Director Kim Jee-Woon and screenwriter Andrew Knauer stick mostly to the car-chase genre while failing to give Schwarzenegger a single good one-liner, unless you count, "Dese tings are all connected."

Meandering mayhem for the sturdy and mature only.