The League of Regrettable Superheroes: Out of everybody else's league - Catholic Courier 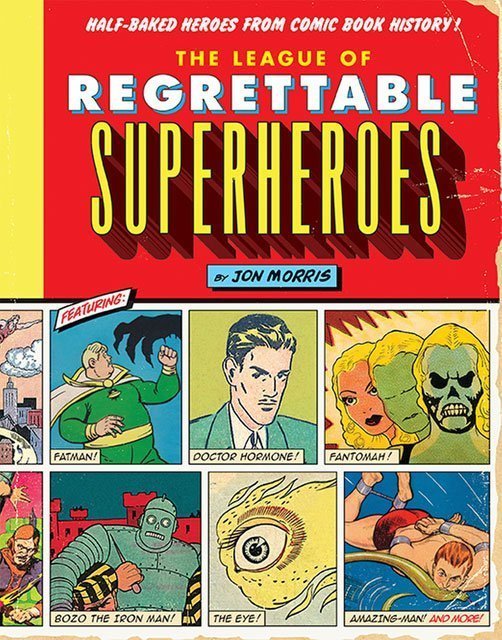 This is an image from the comic book "The League of Regrettable Superheroes." The Catholic News Service classification is A-II -- adults and adolescents. It is not otherwise rated.
NEW YORK (CNS) — Look, up in the sky! It’s a bird! It’s a plane! It’s … #711?
No, that’s not a typo. #711 was, believe it or not, a 1940s superhero. Imprisoned for an offense he didn’t commit, this crime fighter — part man, part number — would escape his confinement nightly to seek justice.
#711 is one of a cavalcade of ill-conceived figures featured in "The League of Regrettable Superheroes" (Quirk Books). Written by Jon Morris, this ironic retrospective showcases, as the cover blurb puts it, "half-baked heroes from comic book history."
Morris’ good-humored tone makes his well-researched volume a delight. And, though it includes some mild scenes of combat, there’s no other content of concern to parents.
Even so, Morris’ sharp, insightful narrative often deals with concepts that would likely confuse children. Who knew, for example, that Marvel Comics pioneer Steve Ditko was interested in philosopher and novelist Ayn Rand’s political ideas?
"Regrettable Superheroes" is divided into sections covering the golden, silver and modern ages of comics. As Morris reveals, it wasn’t only hacks who thought up the lame also-rans he resurrects. Some were spawned by the genre’s royalty, including Jerry Siegel, Joe Simon, Jack Kirby, Roy Thomas, Ditko and C.C. Beck.
The book is particularly refreshing for those who might have grown weary of "serious" and "adult" treatments of superheroes. These goofy, short-lived misfires provide the smiles that have been missing in our own time amid the dark adventures of the problem-ridden men — and women — wearing tights.
Some evocatively monikered standouts from Morris’ D-List: Funnyman, Killjoy, The Ferret, Thunderbunny, Fatman the Human Flying Saucer and Dr. Hormone. The last named, in case you’re wondering, was a World War II-era scientist who used hormone pills to fight the evil country of "Nazia."
He failed to last the duration.
Clearly, not even comics-crazed Hollywood would touch any of these guys.
At least two of the forgotten figures Morris examines will be of particular interest to readers of faith: "Lady Satan" was a character from the 1940s who was the only survivor of a ship sunk by Nazi bombers. Marvel’s "The Son of Satan," who appeared three decades later, was the product of his creators’ interest in capitalizing on the runaway success of the 1973 film "The Exorcist."
Never fear, however: Like Lady Satan, Damien Hellstrom — Son of Satan’s alter ego — employed a diabolical name while, in reality, fighting against evil.
The book contains stylized images of violence. The Catholic News Service classification is A-II — adults and adolescents. Not otherwise rated.
– – –
Judge reviews comic books and video games for Catholic News Service.
Copyright © 2023 Catholic News Service, Inc. All rights reserved. Linking is encouraged, but republishing or redistributing, including by framing or similar means, without the publisher's prior written permission is prohibited.