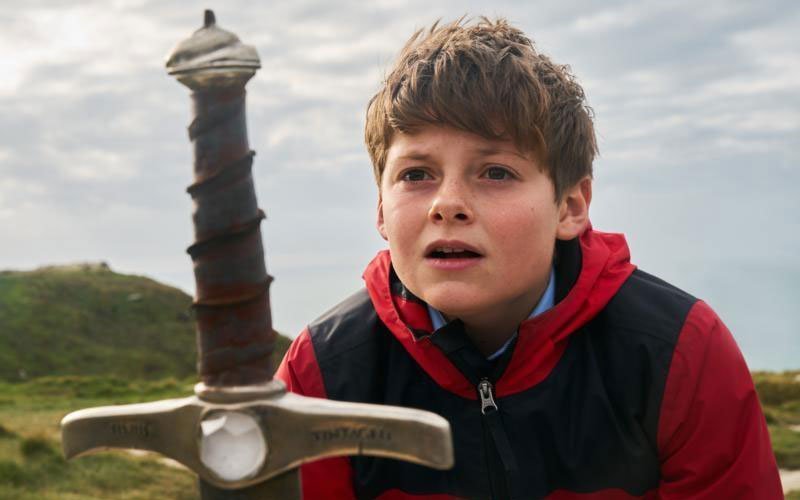 Louis Ashbourne Serkis stars in a scene from the movie "The Kid Who Would Be King." The Catholic News Service classification is A-II – adults and adolescents. The Motion Picture Association of America rating is PG -- parental guidance suggested. Some material may not be suitable for children. (CNS photo by Fox)

NEW YORK (CNS) — The Arthurian legend gets an inventive updating in “The Kid Who Would Be King” (Fox), a thrilling adventure that casts schoolchildren as latter-day Knights of the Round Table, destined to save the world.

Borrowing heavily from the Harry Potter canon, with a dash of J.R.R. Tolkien and Disney’s “The Sword in the Stone” (1963) thrown in, writer-director Joe Cornish serves up that treasured Hollywood rarity: an entertaining, family-friendly film that skillfully blends in strong messages — in this case, about truth, justice and caring for others.

Not to be confused with the 1975 Kipling adaptation “The Man Who Would Be King,” this movie is set in modern-day Britain. It’s a land wracked by divisions, anxiety and political uncertainty (Brexit, anyone)?

Twelve-year-old Alex (Louis Ashbourne Serkis) has but one goal: to get through the school day without himself or his nerdy best friend, Bedders (Dean Chaumoo), being bullied by classmates. No such luck: after Alex stands up to two toughs, Lance (Tom Taylor) and Kaye (Rhianna Dorris), they give chase, determined to humiliate him.

Alex escapes through a hole in the fence surrounding a building site. There he’s amazed to find a shiny sword sticking up in a pile of rubble. He grasps the handle and pulls out the blade, unaware that the mythical Excalibur is now in his grasp, making him the new “king.”

Fabled wizard Merlin promptly arrives, a shape-shifter played alternatively as a fellow schoolboy (Angus Imrie) and a grizzled old man (Patrick Stewart). Merlin warns Alex that his success with the storied weapon has awakened the wicked enchantress Morgana le Fay (Rebecca Ferguson) in her subterranean lair — where she was imprisoned eons ago by her half-brother, King Arthur.

In a mere four days, a solar eclipse will offer Morgana the chance to re-enter the world of the living. Alex has little time to assume the crown, recruit knights and raise an army.

Destiny will not be ignored, however, and under Merlin’s tutelage Alex begins by enlisting Bedders. He also reconciles with his enemies, hoping to benefit from Lance and Kaye’s brawn as well as their popularity. It’s no surprise that the names of the new band turn out to correspond to those of Arthur’s knights: Lance is Sir Lancelot, Kaye is Sir Kay, and Bedders is Sir Bedivere.

Our company of misfits embarks on an epic quest that takes them from London to Stonehenge and on to Arthur’s birthplace, the coastal village of Tintagel in Cornwall. Then it’s back to school where they must convince the entire student body to don armor and join the battle against Morgana’s zombie warriors (whose appearance may frighten younger viewers).

“If we fight together, evil doesn’t stand a chance,” Alex declares, validating Merlin’s observation that “there is an old soul in every child.”

The film contains potentially scary fantasy violence and two mild oaths. The Catholic News Service classification is A-II — adults and adolescents. The Motion Picture Association of America rating is PG — parental guidance suggested. Some material may not be suitable for children.