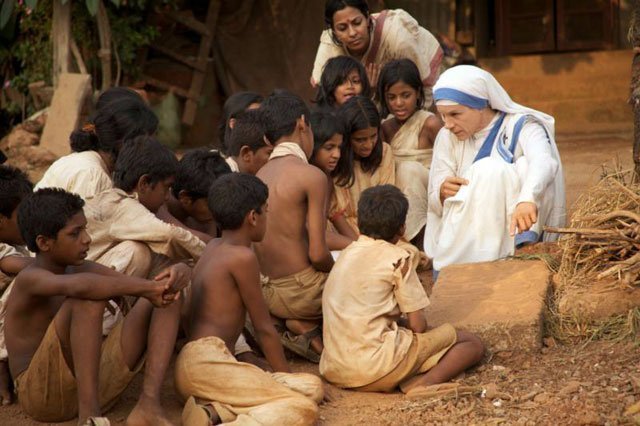 Juliet Stevenson stars in a scene from the movie "The Letters." The Catholic News Service classification is A-II -- adults and adolescents. The Motion Picture Association of America rating is PG -- parental guidance suggested. Some material may not be suitable for children.
By John Mulderig
Catholic News Service
NEW YORK (CNS) — As the elaborate procedures that precede the Catholic Church’s decision to declare someone a saint amply demonstrate, genuine holiness can be difficult to pin down or identify in real life.
When it comes to capturing sanctity on screen, the elusiveness of a person’s interior union with God becomes even more apparent, even when that bond is testified to by extraordinary outward achievements.
There’s also a significant aesthetic challenge to consider: As every reader of poet John Milton’s Bible-based epic "Paradise Lost" soon realizes, evil is — on the face of things, at least — far more interesting than goodness.
Partly that has to do with the disordered mindset resulting from original sin. But it’s also undeniable that wickedness often expresses itself in dramatic events and gestures whereas persevering fidelity to God’s will — although it can be inspired by a sudden, even sensational, moment of conversion — is a lifelong process to be pursued day in and day out.
The launching of wars, the trampling down of enemies, the liquidation of vast numbers of innocents; all these deeds have the built-in quality of spectacle. Hours of solitary prayer, the patient acquisition and perfection of the virtues; although admirable in themselves, these activities, by contrast, are likely to strike even a well-disposed observer as yawn-inducing.
So the filmmakers behind "The Letters" (Freestyle), a biography of Blessed Teresa of Kolkata (1910-1997), have set themselves a daunting task. All the more so, since the posthumous publication of their subject’s correspondence — the documents from which the movie takes its title — startlingly revealed to the world that she suffered for decades from a potentially paralyzing sense of God’s complete absence.
The woman born Anjeze Gonxhe Bojaxhiu in Skopje, Macedonia (in what was then the Ottoman Empire), thus found herself in a paradoxical position.
As the world’s most saintly celebrity, she was a figure committed to — and acclaimed for — spiritually inspired works of mercy, many of which made no sense whatever from a purely worldly perspective. Yet within her own soul, her faith had become almost entirely a matter of abstract theory.
How she carried on in the face of such desolation might provide a rich subject for the most psychologically perceptive of novelists. Expressing her dilemma in a compelling way for moviegoers, however, proves too much for writer-director William Riead — and for his film’s star, Juliet Stevenson.
Riead frames his story via a retrospective conversation between Fathers Celeste van Exem (Max von Sydow), the famed nun’s spiritual director, and Benjamin Praagh (Rutger Hauer), the church official charged with investigating her life with a view to her possible canonization.
But Riead uses this narrative device awkwardly, with the result that the facts surrounding Mother Teresa’s courageous ministry — as well as her tenacious spiritual struggle — are alternately spoon-fed to the audience through dialogue and dramatized in a way that fails to spark interest.
Riead focuses primarily on Teresa’s momentous decision to leave the Sisters of Loreto, the cloistered teaching order in which she began religious life, and dedicate herself instead to the work of serving the most afflicted of her adopted city’s slum dwellers.
He successfully conveys the obedience with which she submitted her personal convictions about her altered vocation to the judgment of the church — her patience being further tried by the persistent but ultimately futile opposition of her former superior, played by Mahabanoo Mody-Kotwal. Yet Riead otherwise fails to delve below the surface.
Given its inspiring subject matter, and the absence of any really problematic content, this appreciative but poorly handled profile makes suitable fare for all but the youngest viewers.
The film contains some tense scenes of conflict and potentially disturbing medical situations. The Catholic News Service classification is A-II — adults and adolescents. The Motion Picture Association of America rating is PG — parental guidance suggested. Some material may not be suitable for children.
– – –
Mulderig is on the staff of Catholic News Service.
Copyright © 2022 Catholic News Service, Inc. All rights reserved. Linking is encouraged, but republishing or redistributing, including by framing or similar means, without the publisher's prior written permission is prohibited.