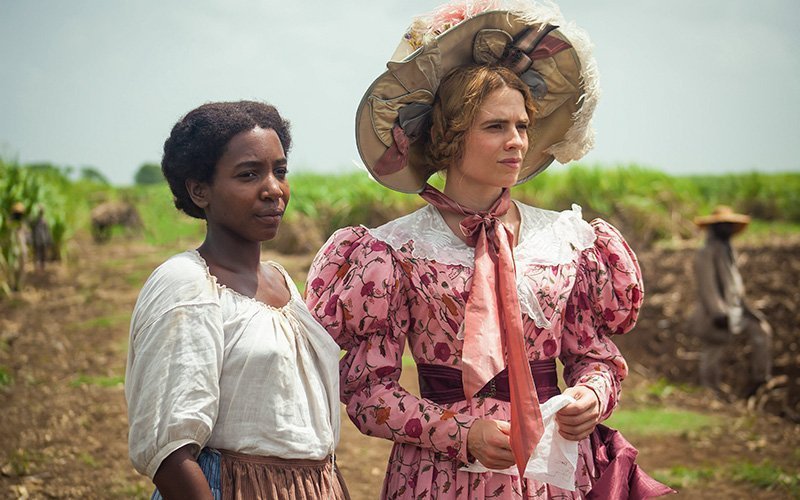 Originally broadcast on BBC One, beginning in December 2018, the three-episode show debuts on PBS as a “Masterpiece” presentation Sunday, Jan. 31, 10-11 p.m. EST. It will air in that time slot through Feb. 14.

Levy, who died in 2019 at 62 after a 15-year struggle with breast cancer, executive produced the series, which Mahalia Belo directed from Sarah Williams’ screenplay.

Acknowledging that her tale isn’t always trustworthy, elderly former slave July (Dona Croll) narrates the saga. She recalls her life on the Amity sugar plantation in 19th-century colonial Jamaica at a time of great personal and social upheaval.

As the drama begins, the younger July (Tamara Lawrance) is a house servant helping her owner, Caroline Mortimer (Hayley Atwell), prepare for a Christmas-night dinner party in 1831. On the personal side, July has become enamored of Nimrod (Jordan Bolger), a dashing freedman. Nimrod intrigues July with the prospect of gaining her own liberation and of their life together.

Events in the wider world intervene, however. The holiday sees the outbreak of a rebellion of the enslaved, led by Baptist preacher Samuel Sharpe. (The conflict that followed, known to history as the Baptist War, saw 60,000 slaves sustain an 11-day uprising.)

The revolt precipitates several tragedies. Fearful that it marks an end to his cherished way of life, Caroline’s brother John Howarth (Leo Bill), who owns Amity, kills himself. Nimrod is scapegoated as his murderer.

Overseer Tam Dewar (Gordon Brown) slays Nimrod, only to be cut down in turn by July’s mom, Kitty (Sharon Duncan-Brewster). Tam had repeatedly forced himself on Kitty, and July had been conceived during one such encounter. Completing the circle of violence, Kitty is executed for taking her revenge on Tam.

In the aftermath of this turmoil, July gives birth to Nimrod’s son, but, feeling overwhelmed, abandons him. “The loss of her mama and that baby boy almost finished that girl,” the older woman says of her younger self.

The abolition of slavery and the arrival of a new overseer, Robert Goodwin (Jack Lowden), seem to offer July an opportunity to rise in the world. Yet complications multiply.

Drawn by the taboo nature of such a relationship, Robert starts an affair with July. For the sake of respectability, however, he marries Caroline. Unsurprisingly, the two women become rivals.

As her peers, led by Dublin Hilton (Richard Pepple), resist Robert’s orders to work unreasonable hours in harvesting the sugar crop, July finds her loyalties divided and her relationship with Robert endangered.

The treatment of this struggle against unjust labor conditions, carried on by those only recently released from bondage, is by far the best element in “The Long Song.” The natural sense of empowerment and quiet insistence on their own dignity the wronged workers project will leave an enduring impression on viewers.

Unfortunately, all this is bound up with — and weighed down by — the rather lurid romantic ingredients in July’s story. As can easily be inferred, these make the program strictly grown-up fare. In addition to them, adult viewers will encounter the violence that inevitably accompanied slavery, in the form of whippings and beatings, along with some sexuality and partial nudity.

In sum, “The Long Song” strikes some high notes. Yet, in order to enjoy them, TV fans will have to endure numerous discordant ones as well.