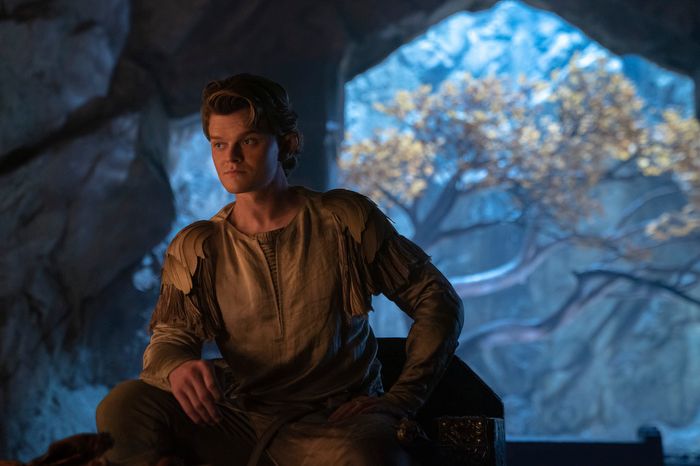 Robert Aramayo as Elrond in “The Lord of the Rings: The Rings of Power.” (Courtesy of Amazon Studios)

‘The Lord of the Rings’ author J.R.R. Tolkien’s life explored in new film

NEW YORK – Though it gets off to a slow start, the Tolkien-derived fantasy “The Lord of the Rings: The Rings of Power” eventually engages viewers with lush visuals and sympathetic characters. Four of the eight-part series’ episodes are currently streaming on Amazon Prime.

Created by John D. Payne and Patrick McKay, the show has a three-pronged plot, the exposition of which is carried out via some pompous dialogue. Once set rolling, however, the story does carry occasional flashes of the magic that J.R. R. Tolkien, the Catholic inventor of Middle-earth, invested into his novels.

This visit to his imaginary realm is too scary for small fry. But, to judge by the first three installments reviewed, it’s an acceptable journey for older teens and grown-ups.

All four of the tale’s central characters are at odds with those around them. Elven warrior Galadriel (Morfydd Clark) is certain that the malignant forces of the evil wizard Sauron are on the move again, despite the insistence of both her king, Gil-galad (Benjamin Walker), and her friend, Elrond (Robert Aramayo), that the sorcerer and his Orc minions no longer pose a threat.

Among the diminutive Harfoot race of hobbits, inquisitive Nori Brandyfoot (Markella Kavenagh) bucks the prevailing caution of her society. And Bronwyn (Nazanin Boniadi), a human practitioner of folk medicine, is carrying on a forbidden romance with elf Arondir (Ismael Cruz Córdova).

While the struggle against the Orcs and their allies is straightforward enough, discussions dealing with larger theories of morality are muddled. In fact, aside from the friendship Nori offers a mysterious, unnamed stranger (Daniel Weyman) – and the beneficial cooperation that results from it – any themes meant to accompany the varied adventures depicted are barely discernible.

The combat violence is mostly stylized. But there are a few gory sights, and one character momentarily resorts to a gruesome tactic in hand-to-hand fighting.

Pleasing to the eye yet not likely to embed itself in TV fans’ memories, this iteration of Tolkien’s saga won’t enhance his legacy much. Broad yet shallow, it amounts to serviceable entertainment that mostly lacks the power of its widely loved source material.