The Lord's Prayer - A circle of praise and petition - Catholic Courier 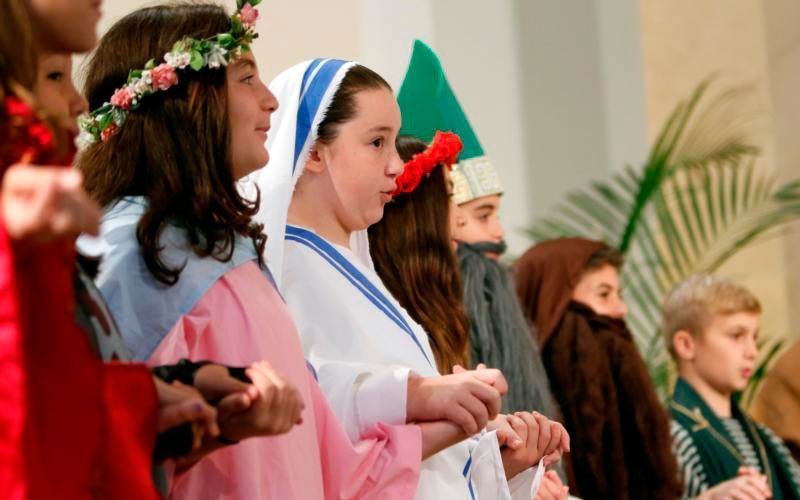 Students dressed as their favorite saints recite the Lord's Prayer during an All Saints' Day Mass at Sts. Philip & James Church in St. James, N.Y., in 2016. For many of us, the Lord's Prayer was the first prayer we learned. (CNS photo by Gregory A. Shemitz)

This is the fifth part in a seven-part series on the Mass.

What was the first prayer you learned?

For many of us, it was the Lord’s Prayer.

And we may have learned it because it’s in the Mass and has been for a long time.

Two versions of the prayer exist in the Gospels, in Matthew 6:9-13 and Luke 11:1-4. Another version appears in the Didache, a manual of worship and doctrine that dates to the first century.

We believe the Lord’s Prayer was used in the earliest liturgies because the Didache places it right after the explanation for celebrating baptism and just before explaining the Eucharist. And it also orders: “Pray thus three times a day.”

St. Jerome (fourth century) noted the prayer’s use at Mass, and St. Gregory the Great (sixth century) moved its recitation to just before the fraction rite, when the celebrant breaks the consecrated bread as the congregation sings the Agnus Dei.

But why is the Lord’s Prayer in the Mass at all? And why place it where it is?

Some early church writers can help: St. Augustine said the Lord’s Prayer covers everything we ever need to ask. And Tertullian, a third-century apologist, called it “the epitome of the whole Gospel.”

So it makes sense that the Lord’s Prayer follows the Liturgy of the Word. And, as the Didache’s placement notes, it’s linked to the Eucharist. Another important point is these words: “Give us this day our daily bread.”

We have just brought our gifts to the altar where they become, for us, the body and blood we are about to share. The purpose of the Lord’s Prayer is simple: worshiping God together.

The prayer used at Mass is a series of seven petitions. Jesus gave them to us when his disciples asked: “Teach us to pray.”

So Jesus started at the basics: with God.

— Our Father, who art in heaven. This opening addresses God, both intimately — “Father” — and from an awe-filled distance: God in heaven, dwelling in perfection and glory we cannot yet know.

The petitions themselves follow and fall in two groups.

The first are the “you petitions” — or, more accurately, “the You,” as in God:

— Hallowed be thy name. “Hallow” means to honor. But, in the ancient world, knowing someone’s name also meant you knew them well. So this petition says we want to draw closer to God, just as God — in Jesus — draws close to us.

— Thy kingdom come. The petition also seeks God’s nearness and expresses a longing for the divine presence that brings about the kingdom.

— Thy will be done on earth as it is in heaven. Here we again ask for the kingdom, not just in the future, but now.

After these first petitions expressing our desire for a relationship with God, we offer petitions about earthly needs. These are the “us petitions” — about us and our relationships.

— Give us this day our daily bread. Nothing is more basic than food. Without it, we die. So this petition deals with everyday survival. God knows, of course, that we need food.

However, we need to remember that “all good things come from God” as St. Teresa of Avila said. The God who gave manna in the desert still feeds us today. This petition also reminds us that God’s food is his very self: the eucharistic bread.

— Forgive us our trespasses as we forgive those who trespass against us. This petition is a two-way street. We seek God’s mercy, but — at the same time — we seek mercy for us and for others.

— Lead us not into temptation. Then, restored to healthy, well-fed relationships with God and with others, we realize we won’t stay there. We’ll need help again. So we pray for the future. We pray because we’ll be tested and we know how easy it is to turn from God at those times.

— Deliver us from evil. Evil exists. No one escapes its touch. As the Catechism of the Catholic Church teaches, “In this final petition, the church brings before the Father all the distress of the world” (No. 2854). Often, we huddle like children in darkness. And yet the darkness has been scattered by Christ’s light. That’s what “Amen” means: that we believe this.

However, where we would normally say “Amen” in this prayer, we don’t in the Mass. We make an addition.

After a brief prayer by the priest, we add: “For the kingdom and the power and the glory are yours now and forever.”

Many think this addition wasn’t in the Lord’s Prayer until recently. True, Jesus didn’t say it. And, yes, it was added by the liturgical reforms following the Second Vatican Council.

However, Eastern churches have used these words in the liturgy for centuries. And, returning to the Didache’s prayer, we find a similar addition: “For thine is the power and the glory forever.”

This type of addition is called a “doxology,” a short song of praise. So, the Lord’s Prayer starts by praising “Our hallowed Father” and, with this doxology, ends in praise.

The whole Lord’s Prayer becomes a great circle of praise and petition enfolding us as we prepare to receive the body and blood of Christ.

(Kasten is associate editor of The Compass, newspaper of the Diocese of Green Bay, Wisconsin.)