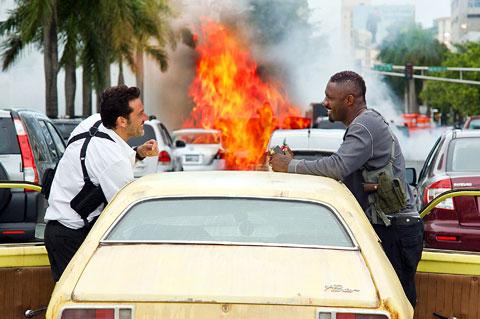 NEW YORK (CNS) — Though the slick, slam-bam action comedy "The Losers" (Warner Bros.) holds itself in higher regard than its deprecatory title and flippant tone would suggest, its appearance is a sure sign that Hollywood wouldn’t mind extending the summer movie season to include every week on the calendar.

As disposable as any flick designed to fill multiplexes during the dog days of August, it can only make a winner out of studio bankers.

Developed from a comic-book series of relatively recent vintage, "The Losers" fancies itself far more hip and original than it is. Swagger may be essential to the picture’s blend of stylized violence and macho jocularity, but the result is wearisome and would certainly qualify as morally objectionable if the violence were more explicit.

Passing for principled heroes in this milieu are five ex-special forces soldiers who, at the outset, toil for the CIA in an official yet clandestine capacity.

While paving the way for an air assault on a local drug dealer, they spy 25 children in the targeted compound. Defying their orders, they attempt to rescue the innocents.

But when the first of the movie’s countless fireballs subsides, they realize Max has double-crossed them. Presumed dead, our five de facto exiles are stuck in Bolivia, losers in their own eyes and fugitives according to Uncle Sam. That is, until the comely and lethal Aisha (Zoe Saldana of "Avatar") turns up and promises to sneak them back into the United States if they agree to eliminate Max.

Her risky proposition affords the opportunity to exact revenge and get their lives back.

As for the character of Max, he isn’t half as eccentric or outrageous as the movie would have us believe; he’s a cartoon kook, a cut-rate Bond villain.

Playing like an elaborate episode of the 1980s TV series "The A-Team" (a big-screen remake of which is scheduled to arrive in June), the predictable plot features a few twists before the groundwork is laid for a sequel. "The Loser’s" modicum of humor is attributable to Evans’ likable performance, and to the recognizable Journey tunes on the soundtrack.

Director Sylvain White ("Stomp the Yard") applies a music-video sensibility, making ample use of slo-mo shots of the heroes walking in stride and letting fast edits and certain graphic overlays pass for cinematic ingenuity. The production is praiseworthy insofar as the action sequences are well-choreographed, which makes you appreciate even more that the mayhem is never graphic.

Consequences of the violence remain off-screen. For example, during a number of point-blank gun murders, the camera stays on the shooter and we don’t see the victim, which, incidentally, fits with the movie’s narcissistic, self-congratulatory quality. Although "The Losers" doesn’t quite warrant an O classification, many adult viewers will also want to steer clear because of the prevalence of foul language and the overall glib tenor.

The film contains a moderately explicit nonmarital sexual encounter, some profanity, at least two instances of rough language, a steady stream of crude and crass verbiage, frequent bloodless violence and some sexual innuendo and banter. The USCCB Office for Film & Broadcasting classification is L — limited adult audience, films whose problematic content many adults would find troubling. The Motion Picture Association of America rating is PG-13 — parents strongly cautioned. Some material may be inappropriate for children under 13.